New Groundbreaking Procedure is a Welcome Option for Treating Fibroids

New Groundbreaking Procedure is a Welcome Option for Treating Fibroids 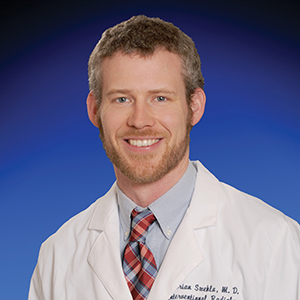 A groundbreaking new procedure now being offered at MedStar Good Samaritan Hospital is providing women suffering with uterine fibroids a welcome option for treating the condition.

Known as radial uterine fibroid embolization (UFE), the minimally invasive procedure involves inserting a catheter into the radial artery located in the wrist, which is then guided by an interventional radiologist into the uterus. It requires a tiny incision and uses small particles to damage and shrink the fibroids.

Fibroids, noncancerous tumors that grow within the uterus, affect 40 percent of women over the age of 40. Typically found in women ages 30 to 50, they can cause heavy, excessive menstrual bleeding, pelvic pain and pressure, and urinary incontinence.

UFE is an alternative to hysterectomy—the surgical removal of the uterus—which was the most common treatment for fibroids for many years. With UFE, the uterus is preserved. “Until now, UFE was typically performed by accessing the uterus through an artery in the groin,” says Brian Swehla, MD, the interventional radiologist who introduced the radial approach at MedStar Good Samaritan. “However, that approach requires the patient to lay in bed and keep their leg straight for up to six hours right after the procedure, which can be very uncomfortable and painful. Radial access has been preferred by cardiologists for coronary interventions for a long time and is now gaining in popularity as a way to access the uterus.”

While the radial procedure can be technically challenging, it makes a world of difference to patients. “Accessing the fibroid through the wrist dramatically shortens the recovery time and results in less pain. My patients are able to get up, move around and go home sooner,” says Dr. Swehla. Plus, there is little to no blood loss.

Shadawn Scott-Simmons was among the first women in the region to have the procedure. “The bleeding during my menstrual cycle started getting heavier than normal about two years ago. I was diagnosed with fibroids, but didn’t want to have surgery. So I put up with it but it kept getting worse. I was bleeding all the time. It was so bad. I felt like a prisoner,” she explains. Scott-Simmons was losing so much blood that she developed symptomatic anemia.

“Once the anemia kicked in I could barely function. I was short of breath and very tired,” she says. Her condition also made it difficult for her to perform her duties as a registered nurse. “I was missing so much time from work I finally had to take a medical leave of absence.” Then her blood levels dropped so low she needed a blood transfusion. “The doctors who took care of me at MedStar Good Samaritan Hospital discussed some of the treatment options that are now available for fibroids and referred me to Dr. Swehla,” says Scott-Simmons.

During her first appointment with Dr. Swehla, he carefully explained the radial procedure to her. “He spent a lot of time with me and answered all of my questions,” she notes. “I liked that the procedure was minimally invasive, which would mean a quicker recovery and less time off work. And I didn’t want to take any drastic measures that would result in my going into menopause at the age of 42. It sounded like a good option.”

Prior to the procedure, Scott-Simmons was given local pain medicine at the wrist to numb it, as well as a mild sedative. Once it was over, she went to recovery for two hours after which she was allowed to move around. She remained in the hospital that night and went home the next day. She had pelvic cramps for a few days, which is common after the procedure, but is now feeling fine. “I feel amazing now. I’m so glad it’s over and I am so grateful,” she says. “When I had my follow-up visit with Dr. Swehla, I told him ‘I have to give you a hug. You gave me my life back.’”

“We are finding that women really prefer the wrist approach,” adds Dr. Swehla. “It’s more comfortable for patients and there is less risk of complications. Any woman who is considering treatment for her fibroids should look into it.”

This article appeared in the winter 2017 issue of Good Health. Read more articles from this issue.