New Hip Gets Patient Back on Her Feet

New Hip Gets Patient Back on Her Feet 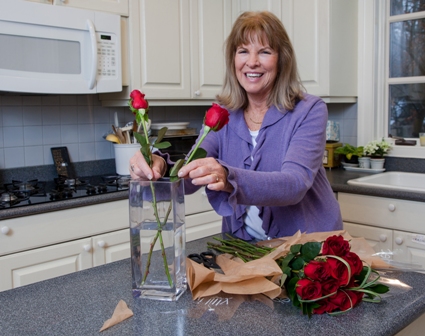 A mere 24 hours after landing in Santa Monica, Marilyn Abrams knew the fun part of her two-month stay was over.

The trip started off well enough for the Bethesda resident. After breakfast and a morning stroll, Marilyn decided to take a bike ride along the Pacific. But then things took a turn for the worse: She lost her balance, toppling to the ground. To her horror, she couldn’t get back up.

Within minutes, Marilyn was in an ambulance; within hours, she was in an operating room as surgeons worked to put her badly broken left femur back together again. She ended up spending six of her eight vacation weeks either in the hospital or a rehabilitation facility.

Once back home, however, Marilyn, then 72, noticed that her left hip was bothering her even more than before the fall. Between the growing pain and a leg that was a half-inch shorter than the other due to surgery, she also had a bad limp. “I started looking around for the best hip replacement surgeon I could find,” Marilyn said. “But because of my previous surgery, I was getting wildly conflicting opinions on everything…from when I could have the replacement to what my recuperation would be like. It was so frustrating!” 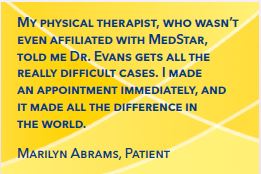 To stave off her pain while she continued her quest, Marilyn did physical therapy. And that’s what led her to the doctor she needed: Brian Evans, MD, of MedStar Georgetown University Hospital.

“My physical therapist, who wasn’t even affiliated with MedStar, told me Dr. Evans gets all the really difficult cases,” Marilyn recalled. “I made an appointment immediately, and it made all the difference in the world.”

Chief of the Adult Reconstructive Surgery Service at the Hospital and a hip and knee specialist with the MedStar Orthopaedic Institute, Dr. Evans is known throughout the region for his success with the most complex cases, including surgical revisions to correct failed or painful total joint replacements.

With arthritis, a leg length discrepancy, and a titanium rod and screws holding her thigh bone together, Marilyn fit the profile.

“First, we had to remove all the hardware from Marilyn’s leg, which was overgrown in spots by bone tissue,” Dr. Evans explained. “With empty holes where the screws once were, Marilyn’s femur was now even more fragile. Her reconstruction would have to accommodate the weakened bone to prevent refracture and allow weight bearing.”

“It all adds up to a more difficult procedure,” said Dr. Evans, who estimates that up to half of his patients are referred from other orthopaedic surgeons. “You have to consider so many things that are simply not an issue with a straightforward replacement.”

Despite its complexity, Marilyn’s operation took Dr. Evans only about 90 minutes to complete, including restoring her leg length. Just like any other hip replacement patient, Marilyn was up and walking the day
after surgery. The next day, she was home.

Only 10 weeks after her replacement, she was traveling again and thrilled to discover she could dash through the airport to catch a connecting flight.

“Dr. Evans gave me my balance and my abilities back,” Marilyn said. “I feel absolutely renewed, and can’t say enough good things about Dr. Evans and MedStar Georgetown.”

MedStarGeorgetown.org/HipReplacement or call 202-295-0549 to make an appointment.