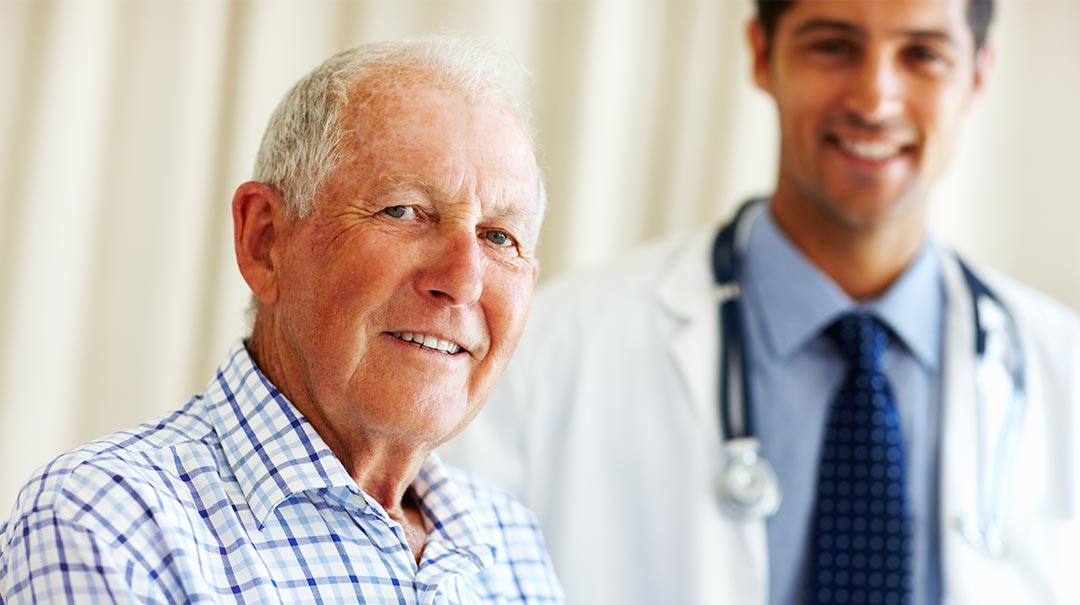 While skin cancers can develop all around the body, the head and neck regions are extremely common locations for skin cancer to appear, as they regularly are exposed to ultraviolet (UV) radiation from the sun. Specific areas in which we commonly see skin cancer include the:

People often are nervous about removing skin cancer on visible parts of the body. However, treatment typically involves a plastic surgeon, who can offer ways to rearrange the facial tissue and camouflage the scar.

In fact, we saw one patient with a small skin cancer on the left side of his face that rapidly increased in size, as he was taking immunosuppressive drugs for a kidney transplant, which prevent the body from fighting cancer. By the time we saw him, almost the entire left side of his face had cancer. To treat him, we removed both skin cancer and lymph nodes in the neck, and we reconstructed the defect with skin and fat from his thigh. This was followed by radiation and chemotherapy. His appearance today is excellent and he remains cancer-free.

Dr. Giurintano discusses treating skin cancers on the head and neck in the Medical Intel podcast.

Common Types of Skin Cancer on the Head and Neck

Some of the most common types of skin cancer that we treat include:

While basal and squamous cell carcinomas generally are easily treatable, melanoma requires more strategic treatment, as it’s more likely to spread to other parts of the body.

How We Treat Skin Cancer of the Head and Neck

For both basal cell and squamous cell carcinomas, Mohs micrographic surgery typically is the best treatment option. Specially trained dermatologists perform this surgery to remove individual layers of cancer tissue, one at a time, and examine them under a microscope until cancer cells are no longer present. This helps to remove all cancer cells while preserving as much normal skin as possible. Once the cancer is completely removed, we can then reconstruct the skin defect in the most cosmetically pleasing way possible.

Treatment for common types of #skincancer of the head and neck removes individual layers of cancer tissue, one at a time, to ensure all cancer cells are removed while saving uninvolved skin. https://bit.ly/2W2Qkd5 via @MedStarWHC

Unlike basal and squamous skin cancer, Mohs surgery cannot be reliably used for melanoma removal. Instead, we remove one to two additional centimeters of normal-looking skin that surrounds the melanomas to help ensure all cancer cells are removed; this is called a “margin.” Because of this, even if the melanoma is small, the resultant defect is often quite large. In these cases, advanced reconstructive techniques can yield a normal appearance. Make sure to speak to your doctor to learn which plastic surgery options might be best for you.

Patients typically go home the same day of surgery or one to two days after surgery, depending on the severity of the cancer. Following surgery, it is important that patients prepare for skin defects that can exist for three to four weeks while their skin recovers. While the scars often are small, some patients opt to address them via reconstructive surgery by a plastic surgeon.

Additionally, if we remove the lymph nodes, recovery requires a close follow-up to ensure that patient’s head and neck skin remains cancer-free.

Skin on the nose, ears, and cheeks often lacks elasticity; this makes defects in these regions more difficult to close by simply suturing the skin edges back together. For these defects, reconstructive surgeons can perform a “local flap”, which moves tissue from nearby areas on the face to reconstruct the defect. We encourage patients to have this surgery within six weeks of their initial surgery for the best results.

Some people are hesitant to receive treatment for skin cancer on the head and neck due to the scars they might receive. However, with the techniques we use today, patients often have the chance to become cancer-free with hardly any visual reminders.

Call 202-877-3627 or click below to make an appointment with a head and neck cancer specialist.