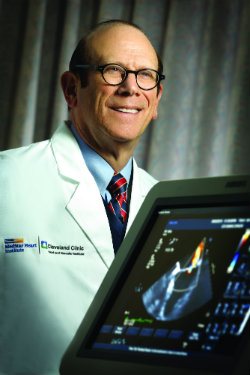 For nearly four decades, Steven Goldstein, MD, MedStar Heart & Vascular Institute’s director of Non-invasive Laboratory, has been a fixture in the field of echocardiography. A longtime member of the American Society for Echocardiography (ASE), Dr. Goldstein has organized and spoken at dozens of conferences, co-edited a textbook and served on numerous committees.

So when ASE announced that Dr. Goldstein would receive its Physician Lifetime Achievement Award for 2015, only one person seemed surprised— Dr. Goldstein himself.

“I couldn’t believe it,” he says. “I’m honored, of course, but I can think of several other people who, in my mind, are far more deserving.” But to fellow professionals like Neil Weissman, MD, president of ASE and head of MedStar Health Research Institute, the choice is no mystery.

“Steve is one of those quiet people who enjoys teaching, answering ques- tions and sharing information,” says Dr. Weissman. “Multiply that over a whole career, and you have someone who has had a positive influence on literally thousands of cardiovascular physicians, both in the U.S. and internationally.”

A native of Louisville, Ky., Dr. Goldstein’s passion for echocardiography was sparked when he took a break prior to his fellowship at Georgetown University in 1975 to spend a year at St George’s Hospital in London. There, he worked with cardiology pioneer Dr. Aubrey Leatham and ultrasound physicist Graham Leech.

“I became totally fascinated with heart echo under their mentorship,”Dr. Goldstein recalls. “The technology was in its infancy, of course, but its poten- tial as a non-invasive means to study and diagnose heart conditions was clear.”

Returning to the U.S. to complete his fellowship, Dr. Goldstein accepted an offer from Washington Hospital Center, which was in the process of expanding its cardiology department.

“Dr. Leatham had advised me to go where there are good heart surgeons, so I came here,” he says. “It was marvelous decision.” Dr. Goldstein considers himself blessed to have developed the Hospital Center’s heart echo capabilities in step with advances in technology.

“There’s been remarkable progress over the years,” he says. “Once we could detect only fluid in the heart, we now have tools like transesophageal echo and 3D echo, which can help support and guide procedures in the OR and cath lab.

Having turned 71 in May, Dr. Goldstein shows no sign of slowing down. In addition to his work at the Hospital Center, he maintains an active speaking schedule and is revising an edition of his ASE textbook that will be more than three times the length of its original version.

“I hope to work until I’m 75, or as long as I feel I can contribute,” he says. “To me, all the fun and interesting things that turn up in the heart come through an echo lab. And there’s no place I’d rather be.”