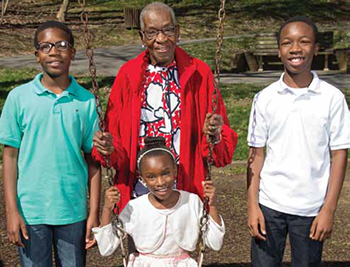 By Leslie A. Whitlinger

When Alecia Benjamin was diagnosed with a relatively rare type of blood cancer, multiple myeloma, in 2015, she wasn’t about to gamble with her health. The resident of the U.S. Virgin Islands traveled stateside on two separate occasions to get second opinions.

One of them was a referral to MedStar Georgetown University Hospital, where its life-prolonging Bone Marrow and Stem Cell Transplant (BMT) Program gave Alecia the second chance she hoped for.

“Once considered experimental, BMT is today’s established gold standard for treating patients with a number of malignant and benign diseases of the blood and bone marrow, including multiple myeloma, lymphoma, and acute and chronic leukemia,” says Scott Rowley, MD, MedStar BMT program director. “For some conditions, it can actually be a cure; for others, it definitely prolongs survival and improves quality of life.”

Multiple myeloma is a blood cancer that resides in the bone marrow, eventually leading to anemia, kidney failure, bone loss and other serious conditions. The cancer affects approximately 30,000 new patients in the United States each year.

Altogether, approximately 85,000 individuals are afflicted with the disease.

A transplant involves a two-step process: collecting bone marrow-like cells from the patient’s blood stream and storing them for future use. A week or so later, cancer patients will receive high doses of chemotherapy to destroy their disease. Afterward, the previously stored cells are infused back into the bloodstream, where they soon begin repopulating and rebuilding the blood and immune system.

Alecia, 75 at the time, went through a comprehensive evaluation to see if she was eligible for BMT. To her surprise, she qualified.

“Some of my other doctors thought that BMT was still experimental or that I wouldn’t be a candidate because of my age,” Alecia says. “But it turns out that neither is true.”

“Even though BMT is considered standard therapy for myeloma worldwide, in the United States less than 50 percent of the patients who could benefit from BMT are referred for evaluation,” Dr. Vesole says. “That’s mostly due to physicians’ concerns that a patient is too old or compromised from other health conditions like diabetes, cardiac disease or renal failure. But new techniques and better supportive care have improved both patient outcomes and the entire transplant process, extending BMT to more patients than ever before.”

Alecia’s procedure took place on November 17, 2015, a red letter day for both her and the hospital: She celebrated her 76th birthday, and MedStar Georgetown celebrated Alecia as their 50th BMT patient.

From start to finish, BMT patients may take weeks to a couple of months to achieve full recovery. However, virtually all patients feel it’s worth it.

“I decided if BMT could prolong my life a little, why not go through with it?” Alecia says. “If it works, I will be happy and enjoy a bit more of life.”

By all accounts, Alecia’s been doing just that. After her BMT, she recuperated with family members in Accokeek, Md., spending Christmas with her grandchildren before returning to the Virgin Islands on New Year’s Day. In early March, she saw her granddaughter get married in St. Thomas. By mid-March, Alecia was back at MedStar Georgetown for her 100-day follow-up appointment where she received good news: Her cancer was in complete remission.

“I had a very good experience with BMT,” she says. “I’m feeling almost normal again!”

To learn more or make an appointment with a bone marrow transplant specialist, please call our scheduling line.

Our Bone Marrow & Stem Cell Transplantation team works with referring physicians to provide advanced, comprehensive care for our patients. We are the only adult academic blood and marrow stem cell transplant program in the Washington, D.C., area.

Our affiliation with the John Theurer Cancer Center at Hackensack University Medical Center gives our patients access to the latest, most innovative treatment options available.