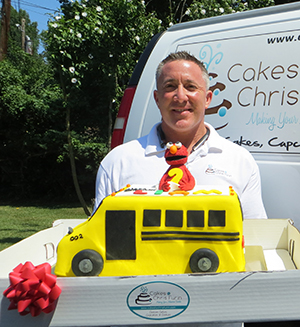 Chris Furin has a sweet job.

A self-taught cake designer, he runs his own business, Cakes by Chris Furin. Chris bakes and decorates extraordinary custom-made confections and delivers them all over the Washington, D.C., area. He has even baked for the White House.

For years, however, daily and debilitating shoulder pain made his life anything but a piece of cake. It started in his 20s, a constant ache caused by intense bodybuilding and weightlifting. By the time he was in his 40s, the pain was so bad that delivering cakes was becoming difficult and sleeping felt impossible.

“I’d wake up every night. My shoulder would be stiff, and I would be in so much pain. Nothing would fix it,” Chris recalls. “That was the point where I said, ‘I can’t take this anymore, I have to do something.’”

Chris reached out to Brent Bowie Wiesel, MD, chief of the Shoulder Service at the MedStar Orthopaedic Institute at MedStar Georgetown University Hospital, to learn about total shoulder replacements.

“You don’t realize how much you move your shoulder until you have a problem,” Dr. Wiesel says. “You can rest a bad ankle or knee, but a painful shoulder hurts all the time.”

Dr. Wiesel knows this firsthand. He injured his own shoulder while preparing for the 1996 Olympics as a member of the USA Canoe/Kayak whitewater slalom team. The injury and two subsequent surgeries prevented him from competing in the Olympics, but he returned to the sport recreationally and went on to focus his medical practice on helping others with similar injuries.

“You know it’s time for a replacement when joint surfaces that used to be smoother than ice start to look like a gravel road. That is what causes the pain,” Dr. Wiesel explains. “Many people put off surgery hoping the pain will go away, but it just worsens over time.”

Specialized computer software allows Dr. Wiesel and his team to plan out surgeries in 3D, create custom surgical instruments, and use patientspecific implants that closely replicate each individual patient’s own bone. These advanced technologies allow for the best possible outcomes, with 85 percent of modern shoulder replacements working well even after 15 years.

Chris had his right shoulder replaced in November 2015. It reduced his pain so dramatically that he got the left one replaced just over a year later. After surgery, patients typically spend one night in the hospital, six weeks in a sling, and four months improving their strength and range of motion in physical therapy.

“I would definitely recommend this to someone who is considering it. I never wake up at night in pain anymore and to not be in constant discomfort is just amazing,” he says.

Chris says Dr. Wiesel was realistic, telling him he would regain 70 percent of his mobility and drastically reduce his pain. Post-surgery life has required a few adaptations, such as exercising in other ways instead of lifting weights, but it’s been worth it.

“My wife says I am less grumpy now,” he says with a laugh. “She’s right. Life had gotten a little rough because when you are in pain for so long, it affects everything. It’s about so much more than your shoulder. You can’t do the things you love and that is tough psychologically. It’s all so much better now.”

Dr. Wiesel hears this often. “After surgery, patients often tell me that the only thing they are upset about is that they didn’t do it sooner. When they’re no longer living with shoulder pain, life is so much better.”

MedStar Georgetown University Hospital is part of the MedStar Orthopaedic Institute, with more than 35 orthopaedic surgeons and locations throughout D.C., Maryland, and Virginia. Visit MedStarOrthopaedicInstitute.org for a complete listing of physicians and locations.

For more information, visit MedStarGeorgetown.org/PainRelief or call 202-295-0549 to make an appointment.