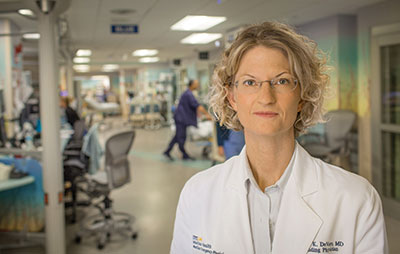 In fiscal year 2014, the program treated 420 patients, more than double the roughly 200 patients treated when services first began in 2008. Those treated ranged in age from 16 to 77, with 10 percent of patients being male or transgender. In an earlier year, one patient receiving treatment was 100 years old.

“In my ideal world, every hospital in the District would have a specialized center to address sexual assault and intimate partner violence (IPV),” Dr. DeVore says. “I believe so strongly in this approach, and this program truly helps remove barriers to care.”

Currently, the Hospital Center is the designated hospital in the District providing free services for victims of sexual assault or IPV. Offered through the Emergency Department (ED), these services include specialized forensic exams and collection of evidence, physical evaluation for other potential injuries, preventive measures for pregnancy and sexually transmitted diseases, and professional victim advocates and case managers, who connect patients to other victim services.

How much or how little services a patient receives is entirely up to the patient, Dr. DeVore says, noting that one objective of the program is to provide victims with the ability to regain and take control of their health and well-being. For some patients, that could be as simple as requesting Plan B One-Step® emergency contraception, while others may elect more extensive services, including a head-to-toe physical exam, with collection of DNA evidence and forensic photography.

While most SANE exams take place in the Hospital Center’s ED, the program is a collaborative effort with District of Columbia Forensic Nurse Examiner (DCFNE), a non-profit community organization. It works in conjunction with other D.C. agencies and offices, including the Office of Victim Services, under the Mayor. Forensic nurses are employed as consultants through DCFNE, with two nurses always on-call 24 hours a day. Nurses are also available to travel with a “go-bag,” should a victim present at a different District hospital and be too unstable to be transferred.

According to Dr. DeVore, the truth is in details, which is why forensic exams utilize specialize equipment and techniques for evidence collection. One such measure is an Alternative Light Source, which can reveal injuries unseen to the human eye. Fluids are also collected for DNA testing, and patterns of bruising are meticulously documented, all critical measures important to investigations, should a victim elect to report the assault to police.

Dr. DeVore notes that as part of the 2009 reauthorization of the Violence Against Women Act, victims of sexual assault are entitled to medical forensic care without having to report the violent act to police.

“This allows us to collect DNA that otherwise would degrade and wash away, as time goes on. Then the victim has time to decide whether or not s/he wants to report this to police,” she says. “The more information we can collect and provide, the more details are present to help reconstruct a story, and the more appropriate justice will be served.”

“We don’t work for the defense or the prosecution,” she adds. “Our job is to collect and document necessary information, and provide comprehensive medical care for the patient.”

Another important focus of care is recognition and awareness of the severity and nuances of strangulation, which Dr. DeVore says occurs 75 percent of the time in IPV cases. Because classic symptoms of bruising, abrasions and swelling are often not present in patients, providers need to be aware and educate patients about potential later problems, such as voice changes, memory impairment, headaches and other symptoms of brain injury.

Currently, Dr. DeVore is working on a grant proposal that would expand forensic nursing to general trauma, noting that trauma patients who are victims of violent crimes often need similar expertise and documentation.

“This will allow our trauma physicians to do what they do best without worrying about collection of evidence,” she explains. “For those who survive a violent crime, we would be able to collect DNA, perform body mapping of injuries and take any necessary photographs.”

Plans are also underway to construct a dedicated forensic exam room in the Emergency Department, something Jeffrey Dubin, MD, MBA, chair, Department of Emergency Medicine, hopes will completed by the end of the calendar year.

“Evidence collection, taking necessary photos and careful documentation is so important because it can be used later by the judicial system,” explains Dr. Dubin. “Patients of domestic violence and sexual assault may not want to report to police right away. But if a patient later decides to make a formal complaint, having evidence collected is much better than not having any evidence, except for the written medical report."

SANE services are based on patient need and circumstances and may include:

Requirements to Become a Forensic Nurse with DCFNE: