What Is Robotic Surgery? | MedStar Health

Taking minimally invasive surgery to the next level

Robotic surgery technology lets your surgeon see with enhanced definition, move more precisely, and better pinpoint the area of your body being treated. It also involves small, strategically placed incisions instead of the large ones typical of older techniques. These enhanced capabilities offer you greater safety and faster recovery.

Our skilled MedStar Health surgeons are extensively trained and leading the way in robotic surgeries. Today, we apply them to a wide area of specialty surgeries, including:

MedStar Health continues to offer world-class care by acquiring the latest innovative robotic navigation technologies that improve surgical accuracy. These advanced technologies are safer for patients as they have less postoperative pain, a reduced risk of infection or the need for blood transfusions, and a speedier recovery. Patients can get back to their everyday lives faster.

This innovative technology allows us to diagnose small peripheral lung nodules that are nearly impossible to reach with traditional bronchoscopic or percutaneous biopsy methods. Using a flexible robotic bronchoscope, we can navigate deep into the lungs and obtain tissue samples to determine if lung cancer or other disease is present.

Benefits include:
Safety: Lower risk of pneumothorax or bleeding.
Accuracy: Greater precision allows us to biopsy small nodules that previously had to be watched until they grew to a size amenable for biopsy by traditional techniques.
Efficiency: By obtaining an earlier diagnosis with staging at the same time, patients are able to proceed with the treatment they need sooner.

The da Vinci® robotic surgical system combines a small 3D camera, instruments that are the size of a dime, and a surgeon-controlled console. Together, these provide superior visualization and a greater range of motion.

From a seated position at the console, your surgeon can position his or her eyes and hands in alignment with the robotic system’s camera and instruments, to operate with extreme precision. The surgeon is 100% in control of the robotic surgical system the entire time.

Globus ExcelsiusGPS is the first and only spine robot of its kind in the world that combines a rigid robotic arm and full navigation capabilities into one adaptable platform for accurate alignment in minimally invasive neurosurgery. By using both robotics and navigation, the spine robot enhances safety, and improves efficiency and accuracy for patients, staff, and surgeons.

The navigation system in the ExcelsiusGPS, provides real-time visualization of the instruments and screws with relation to the patient’s unique “map,” created from preoperative images, and adjusts accordingly if the patient moves. Merging preoperative CT patient images with just a few X-rays taken during surgery allows surgeons to pinpoint a location on the spine and instruct the robot to aim for the exact location. The imaging systems also provide surgeons with the best visualization during surgery eliminates the need for the surgeon to look back and forth between the patient and a separate X-ray image. Built with the ability to continually evolve and improve patient care, surgeons are able to verify operative planning and receive real-time navigation feedback throughout the procedure.

Unlike other spine surgeries, patients are able to recover faster, have less postoperative pain, and a reduced risk of infection or the need for blood transfusions.

MedStar Georgetown University Hospital is the first and only hospital in the region to offer the Ion™ robotic-assisted bronchoscopy system, a minimally invasive biopsy technology that enables physicians to obtain tissue samples from deep within the lung, putting small peripheral lung nodules within reach. This next-level procedure that helps with the early diagnosis of lung cancer is now available to your patients. Ion’s reach and flexibility means smaller nodules (10 to 30 mm) can be evaluated earlier. Notably, survival rate drops to 70% for nodules that reach 20 to 30 mm. The survival rate is over 90% when cancerous lung nodules are caught and treated at 10 mm or less.

How patients will benefit from Ion:

Traditional Open and Robotic-Assisted Colon and Rectal Surgery both have the same surgical principles.

The advantages of a Robotic-Assisted Colon and Rectal procedure include:

Robotic cystectomy is simply a minimally invasive surgical method for bladder cancer. Using this method, the surgeon is able to make smaller incisions, which spare vital, but delicate, nerve and muscle tissue.

Similar to a standard laparoscopic cystectomy, the robotic-assisted cystectomy may require a urinary diversion with subsequent reconstruction for the removed bladder. For men and women alike, such reconstruction would include a continence reservoir that holds urine in the abdominal cavity until the patient has been fitted with a catheter to empty urine or a bladder replacement and an external bag for urine collection.

MedStar Health orthopedics offers MAKOplasty, a unique robotic technology used for total hip and knee replacement surgery. This advanced, robot-assisted technology is a less invasive and more accurate alternative to traditional surgery. The entire procedure, from preparation to implant, is customized to each patient’s unique anatomy for a more natural fit and better function.

Mako Robotic Arm Assisted Technology provides you with a personalized surgical plan based on your unique anatomy. First, a CT scan of the diseased joint is taken. This CT scan is uploaded into the Mako System software, where a 3D model of your joint will be created. This 3D model will be used before and during the surgery to assist your surgeon in performing your hip or knee replacement.

Robotic-assisted laparoscopic pyeloplasty is a surgery that repairs congenital or acquired narrowing or scarring where the ureter, the tube that drains urine from the kidney to the bladder, attaches to the kidney. It is used to treat ureteropelvic junction (UPJ) obstruction, a condition where a blockage occurs at the junction where the pelvis and ureter meet.

Over time, obstruction of urine drainage from the kidney by a UPJ obstruction can result in abdominal and flank pain, nausea and vomiting, kidney stones, urinary tract infection, high blood pressure, and even deterioration of kidney function. During pyeloplasty, this obstruction is removed, and the normal parts of the kidney and ureter are sewn back together.

Laparoscopic (robotically assisted) radical prostatectomy is a method of removing the entire prostate gland. This method requires small incisions to be made in the abdomen, through which a surgical robot’s arms are then inserted. The surgeon controls the robot’s arms through a robotic interface, which controls the cameras and surgical instruments. Benefits of this procedure for most patients include:

MedStar Health is one of few health systems in the world to perform Retzius-sparing Robotic Assisted Radical Prostatectomy, which leads to improved overall continence, earlier continence and improved quality of life. Additionally, following this Retzius-sparing Robotic Assisted Radical Prostatectomy patients go home with a suprapubic tube rather than urethral catheter, which is much more comfortable.

The Center for Liver and Pancreas Surgery is home to one of the most comprehensive minimally invasive robotic surgery programs in the nation, treating benign and malignant conditions of the liver, bile duct, and pancreas. During robotic surgery, we use a computer-controlled robot to assist in certain surgical procedures. These robotic “hands” have a high degree of dexterity, giving us the ability to operate in very tight spaces in the body that would otherwise only be accessible through open surgery.

As with all procedures performed at the Center for Liver and Pancreas Surgery, patients who undergo robotic surgery receive care from a multidisciplinary team, including radiologists, oncologists, and gastroenterologists as part of our Pancreas and Liver Diseases program.

ROSA ONE® Brain can assist in a variety of neurosurgical procedures, such as:

MedStar Health is one of the few health systems in the region performing transoral robotic surgery (TORS) for head and neck cancers and obstructive sleep apnea. Most TORS procedures are performed for tumors of the oropharynx, which includes the soft palate, the base of the tongue, and the tonsils. TORS may also be potentially used for tumors of the supraglottis, the area above the vocal cords, and hypopharynx, the area next to the voice box.

There are many advantages to undergoing TORS for treatment of these tumors rather than a traditional, open procedure. These benefits include:

TORS for obstructive sleep apnea (OSA) is a new approach to treating this disorder. One possible cause of OSA is excessive tongue base tissue that can fall backward during sleep, obstructing the airway. Additional possible causes are excessive soft palate tissue, or enlarged tonsils that block flow of air when sleeping. One of the treatment options for OSA is to remove the excess tissue, which can be difficult to do through traditional surgical methods.

During a robotic procedure, the surgeon has an unparalleled view of the operating field. Due to the dexterity of the robotic instruments, the surgeon can access and remove the obstructing tissue in locations where traditional approaches have difficulty.

Until relatively recently, thoracic surgery was performed through large incisions associated with spreading of the ribs and occasionally the breastbone. This is often associated with side effects including pain, more (temporary) respiratory compromise, and a longer recovery.

More recently, many thoracic surgery procedures have been performed in a minimally invasive fashion using small incisions, no rib spreading, and a video and camera.

The introduction of the robot has revolutionized thoracic surgery in many ways. During the surgery, the surgeon will control the four arms of the robot while sitting in a console.

The benefits of the robot and its technological refinements over conventional "open" surgery and VATS surgery include:

Our thoracic surgeons at MedStar Health are very experienced and proficient with the robot and have been performing robotic surgery for many years. Each patient will be individually assessed regarding the suitability and likely success of a robotic procedure. 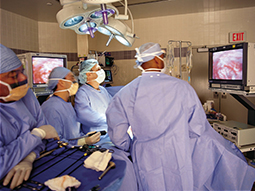 Getting the care you need starts with seeing one of our robotic surgery specialists.