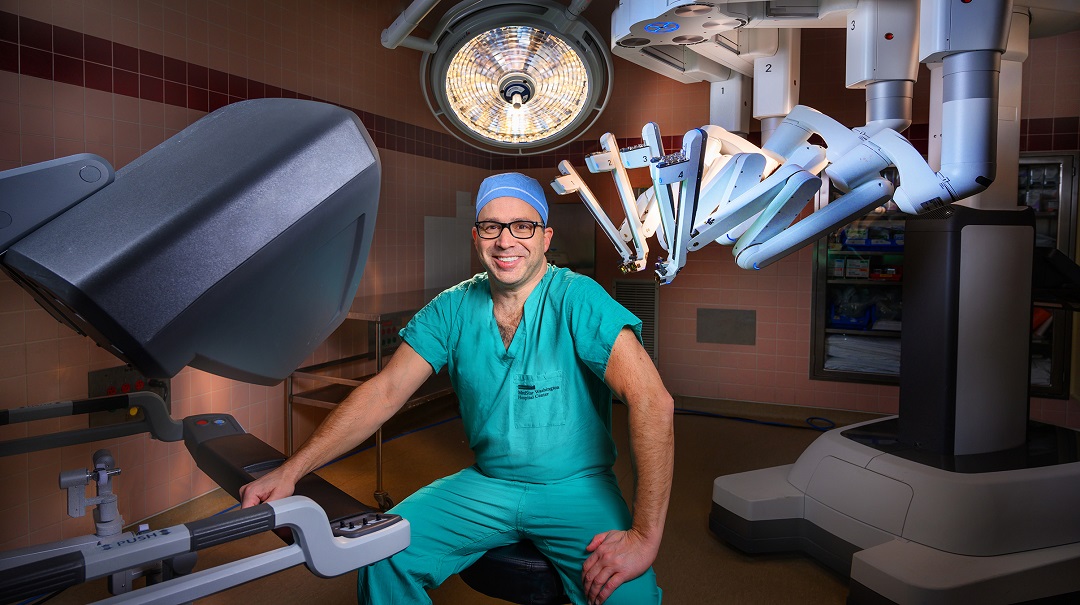 When the first minimally invasive surgery—also called laparoscopic surgery—was performed in the early 1900s, a surgeon would use a hollow wooden tube with a candle to look in a patient’s body through a small incision. Nobody could have imagined the impact it would have.

By the early 1990s, surgeons operated every day through small incisions with what was then a new tool called a laparoscope, which is a slender tube with a tiny video camera and a light on the end. Today, minimally invasive surgery has expanded through the use of robotic technology to include intricate thoracic surgeries for lung conditions, esophageal problems, and other thoracic conditions. What a difference 100 years makes!

The robotic technology our surgeons use includes a camera and mechanical arms with surgical instruments attached. The console also provides a surgeon with a more enhanced, 3-D view for the surgery. Nothing is automated, so the surgeon is still in total control through the use of a console. The robot helps doctors perform safer, more precise surgeries that result in:

For thoracic surgery, which includes everything in the thorax (the part of the body between the neck and the abdomen), we treat both cancerous and benign conditions. The most common surgery I perform related to the esophagus is for paraoesophageal hernias and gastroesophageal reflux disease, also known as GERD. We also treat lung cancer and various benign diseases of the mediastinum, or the mass of tissues and organs separating the sternum in front and the vertebral column behind.

Patients typically have less pain after a minimally invasive robotic surgery than after a traditional open surgery because the incisions are smaller. Traditional surgery usually involves a large incision, anywhere from six to 12 inches. Robotic assisted minimally invasive surgery is what we call a port-based surgery. For the patient, this means less pain and better incision healing since the instruments used in the operation pass from outside the body to inside through the port without injuring the muscle and skin. This often results in patients taking less narcotics and getting back to their daily lives quicker.

Most people recovering from traditional surgery are in the intensive care unit (ICU) anywhere from one to five days, whereas those who have robotic surgery typically don’t need to go to the ICU at all. They’re walking up the stairs, eating, and drinking by the next day or so. Usually a patient’s biggest complaint is they’re a little bit sore, but nothing compared to open surgery. A patient is typically at least 90 percent better 10 to 14 days after surgery.

Surgery via minimally invasive #roboticsurgery typically results in at least 90 percent recovery in just 10 to 14 days. via @MedStarWHC

The thoracic surgeons at MedStar Washington Hospital Center are outstanding. Everyone is committed to patients’ well-being and we have many years of experience performing minimally invasive robotic surgeries. Advances in surgery have brought us from a time where small incisions for operation were risky to being practiced regularly with the assistance of robotic technology. Imagine what the next 100 years could bring!

If you are interested in learning more about robotic thoracic surgery, call 202-877-8115 or click below to make an appointment.