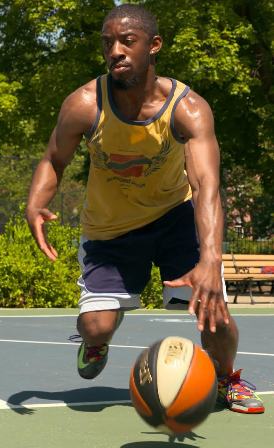 Dominic Nwanji has loved playing basketball since he was a child.

“It means everything to me,” says the 28-year-old. “When I play, any stress, concerns, deadlines or anything going on in my life takes a back seat. I am able to relax.”

Things came to a screeching halt on the court for Dominic during a game at his local YMCA. Two players tried to cut him off as he was heading for the basket. Dominic skidded to a stop so suddenly that his knee buckled as he twisted to pass the ball, causing him to fall to the floor in pain.

“When it first happened, I thought it was just a bad knee tweak but the pain didn’t subside,” Dominic says. “Then I realized, maybe this isn’t something simple.”

Dominic was told he needed reconstructive surgery at his first consultation in North Carolina, where he lives. So he traveled to Washington, D.C., where he has family and went to MedStar Georgetown University Hospital, part of the MedStar Orthopaedic Institute. He was shocked when William F. Postma, MD, chief of Sports Medicine in the Department of Orthopaedic Surgery at MedStar Georgetown, told him that instead of reconstructing his ACL, he could possibly repair it.

“I hadn’t even heard of a repair,” Dominic says. “So, I asked Dr. Postma to explain the procedure to me a few times before ultimately deciding it was my best option.”

“The gold standard is still to reconstruct ACL injuries and at MedStar Georgetown we perform all kinds of reconstructions,” Dr. Postma explains. “But a repair can be an alternative for some individuals and the type of tear Dominic had is amenable to that. Most people are not candidates for it because of the location of the tear, but for patients that are, there are some benefits.”

The ACL attaches to bone in two places—the tibia (leg bone) and the femur (thigh bone). In a repair, strong stitches help anchor the ligament back onto the bone, leading to a faster recovery of about four to six months and more natural-feeling knee movements.

“Repair techniques are now done arthroscopically with a small camera and better instruments so we can see what we are doing without harming a lot of other tissue,” says Dr. Postma.

Dr. Postma says that all of his patients to date have had successful repairs. That has certainly been the case for Dominic, who was back on the court six months after his repair surgery.

“It is easy to become discouraged because the recovery process challenges you in ways that you are naturally unaccustomed to,” Dominic says.

“However, your confidence rises as you keep a positive attitude and notice your progress from week to week. People have actually told me I’ve gotten better as a player since the surgery,” he says with a laugh.
“I feel just as happy on the court as I did before the injury. It hasn’t held me back at all.”

To learn more about orthopaedic treatments offered at MedStar Georgetown, visit MedStarGeorgetown.org/ACLRepair or call 202-295-0549 to make an appointment.