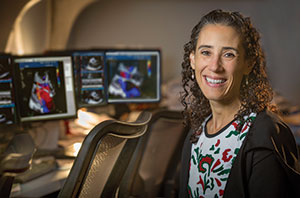 Chagas Reaches Communities in the U.S.

Bolivia is more than 4,000 miles from Washington, D.C., Yet, these days it feels much closer for cardiologists in the region, thanks to several physicians at MedStar Heart & Vascular Institute (MHVI). In the clinic, in outreach and through their research, these physicians are spreading the word about the growing local incidence of Chagas disease, a parasitic infection that can damage the heart.

Chagas, which affects eight million people worldwide, according to the World Health Organization, is widespread in Latin A  is much less common and almost every Chagas patient acquired the illness from living in Latin America.

With the largest Bolivian immigrant population in the U.S. now residing in the D.C. area, the local medical community is beginning to encounter Chagas patients, says Rachel Marcus, MD, MHVI echocardiologist. The Centers for Disease Control and Prevention estimates that about 300,000 in the U.S. have the disease, of which an estimated 30,000 to 45,000 have Chagas cardiomyopathy. U.S. blood banks began screening for Chagas in 2007. The parasite can be transmitted through transfusion and organ donation.

Dr. Marcus began working with Chagas in 2012, when she was debating whether to pursue a Master’s Degree in Public Health. When she shared her thoughts with a local global health expert, he advised her to forget the public health degree and instead open a Chagas clinic.

With support from Doctors Without Borders, Dr. Marcus co-founded the non-profit Latin American Society for Chagas (LASOCHA). She receives queries from all over the United States about how to diagnose and manage the disease. She also works on Chagas research.

Caused by the Trypanosoma cruzi parasite, Chagas is transmitted by the tiny beetle-like triatomine bug that thrives in the mud and corrugated metal housing in rural Latin America. Known as “kissing bugs,” the triatomine emerge at night from cracks and crevices. They bite a host (human or other mammal), and after drawing blood, the triatomine deposits the T. cruzi parasite as it defecates close to the bite.

Those infected with Chagas may not know they have it. The initial acute phase is different for different people, says Dr. Marcus, ranging from mild flu-like symptoms to life-threatening myocarditis or meningoencephalitis. “Usually it’s diagnosed through a blood test,” she says. Unless treated at an early age and early stage with antiparasitics nifurtimox or benznidazole, Chagas remains in the human body for life. About 30 percent of those infected experience health effects decades later, such as cardiomyopathy, heart failure, and altered heart rate or rhythm and, less commonly, gastrointestinal issues, such as megaesophagus or megacolon.

Despite more than 40 years of study, understanding exactly how heart disease evolves decades after infection with Chagas isn’t clear, says Dr. Marcus. For MedStar Heart & Vascular Institute heart failure expert Maria Rodrigo, MD, the Chagas patients she treats present with more challenges. “When compared to patients with other etiologies of heart failure,” she says, “Chagas patients seem to have higher mortality and a higher rate of arrhythmia.”

Unfortunately, once Chagas has been in the body for years, effective therapy is limited. “We had been crossing our fingers that a study released this fall would show a benefit to treating adults with the antiparasitic drug benznidazole, but there was no reduction in risk of heart disease progression,” Dr. Marcus says. “For the majority of people with Chagas disease, we don’t yet know if treatment will be helpful, because good quality clinical trials in the patient population are scarce. It is a neglected disease of poverty.”

Dr. Marcus traveled to Bolivia last year as the echocardiologist in a Chagas study, and presented at the American Society of Echocardiography in June. “I started with, ‘You’re not going to believe this is here,’ ” she says. She hopes to return to Bolivia next year as part of a study that will attempt to image the earliest stages—and then the evolution – of Chagas-related heart disease.

Individuals with Chagas are migrating worldwide from Latin America. The World Health Organization estimates Chagas affects 80,000 to 120,000 Latin American immigrants in Europe, with increasing cases in Japan and other parts of Asia. Some studies also suggest the T. cruzi parasite is shifting further north as animal populations migrate in response to climate changes.

For now, the MHVI team continues to educate local colleagues. Dr. Asch is leading an effort to connect experts around the globe with American cardiologists “to disseminate knowledge that’s not yet widely known in North American cardiology practice.”

Dr. Rodrigo’s patients testified before the Federal Drug Administration about the need for medications and rapid blood tests for Chagas in the U.S. Dr. Marcus conducts grand rounds for Internal Medicine as well as Cardiology residents in the hope that U.S. physician familiarity with the disease increases quickly. “One of our MHVI fellows diagnosed two cases of Chagas. I told him he is now qualified as a local expert on the subject.”

Concerned About a Patient?

Any cardiac patient with arrhythmia, conduction abnormality (particularly RBBB with LAFB, or LV dysfunction), should be screened for Chagas.

Rachel Marcus, MD, is available to physicians who would like to discuss how to screen and how to treat any patient identified with Chagas.

Please email your questions to rachel.r.marcus@medstar.net.

3. Amastigotes multiply by binary fission in cells of infected tissues. Trypomastigotes can infect other cells and transform into intracellular amastigotes in new infection sites. Clinical manifestations can result from this infective cycle.

4. Intracellular amastigotes transform into trypomastigotes, then burst out of the cell and enter the bloodstream.