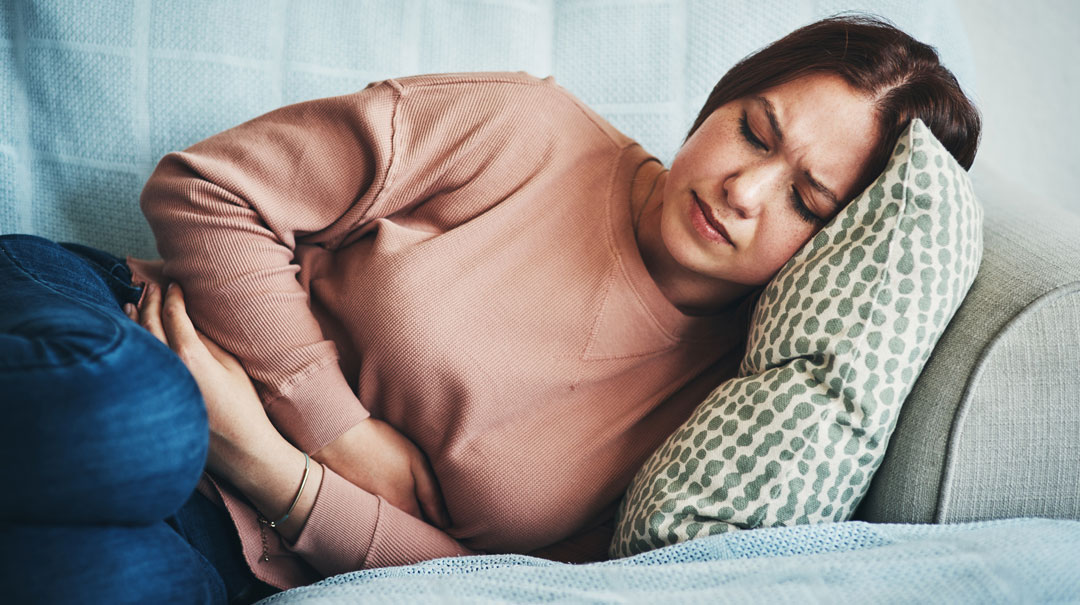 Having unusually intense pain with menstruation is a way of life for many women. They bear it stoically, perhaps because their mothers and sisters have always experienced the same issue or because they simply attribute it to “being a woman.”

Some amount of cramping can be expected at the time of a woman’s period. But extreme pain during menstruation—or heavy bleeding and pain from intercourse, bowel movements, or urination—isn’t normal. It may be endometriosis.

If you’re experiencing this pain, you’re not alone: endometriosis affects more than 6 million American women. In fact, it occurs in about one in 10 women of reproductive age, most commonly women in their 30s and 40s; however, it also has been found in young girls and postmenopausal women.

When a woman becomes pregnant, the newly fertilized embryo becomes embedded in the endometrium, the lining of the uterus. One theory is that in some women, for reasons unknown, the endometrial tissue travels outside the uterus and begins to take hold and grow in other parts of the body. This displaced tissue remains sensitive to estrogen, the hormone that regulates the menstrual cycle, so it can literally cause symptoms of menstruation wherever it is growing, most typically severe pain and cramping at the time of a woman’s period.

Other theories are that endometriosis develops as part of the autoimmune process, or as part of “misprogramming” during embryologic development before a woman is even born.

Endometrial tissue can migrate literally anywhere in the body. Most typically, it appears in the pelvis, on the ovaries, fallopian tubes, bladder, or rectum.

Endometriosis can add an element of risk to a woman’s pregnancy, although many women with the condition do successfully become pregnant and carry a healthy baby to term.

Endometriosis affects more than 6 million American women, causing pain and potentially affecting pregnancy. But there is help for chronic symptoms. @VadimMorozovMD has the details. https://bit.ly/3t9qSjf via @MedStarWHC

So, why do some women have endometriosis, but not others? Although the cause of the condition is unknown, it tends to run in families—if a woman has it, chances are, her daughters and granddaughters may develop it as well. And although endometriosis is not a cancerous condition, women with the disease may be at slightly higher risk of developing some cancers.

For many women, the menstrual period is often marked by cramps and pain. For women with endometriosis, endometrial tissue that has migrated to or developed in other parts of the body will intensify that discomfort by causing additional inflammation, bleeding, cramping, and pain during menstruation. If endometrial tissue has attached to the bladder, for example, monthly period pain will include discomfort in the area of the bladder as well, causing bladder pain, an urge to urinate, and occasionally blood in the urine.

Additional but less common endometriosis symptoms include GI symptoms such as constipation or diarrhea, bloating, and upset stomach. Pain caused by endometriosis can leave the patient in a painfully unpleasant state each month, unable to play sports, care for children, have intercourse, or perhaps even get out of bed.

Symptoms typically begin in a girl’s teen years and get progressively worse until the disease is finally diagnosed years later. Some patients may experience no symptoms at all, yet the condition is discovered during an unrelated surgery.

While this condition does not cause infertility per se, it may make it more difficult for a woman to get pregnant. In almost 40 percent of women who have trouble conceiving, we find that inflammation from endometriosis has damaged ovaries, eggs, fallopian tubes, or the uterus itself.

When a woman with endometriosis wants to have a child, we recommend trying naturally for three to six months, depending on her age. If she does not conceive within that timeframe, we discuss short- and long-term goals. The gold standard of care is laparoscopy to remove ectopic endometrial and scar tissue which may be affecting pregnancy.

Most women with endometriosis are likely to conceive. But it’s important that they consult with their Ob/Gyn to understand the potential risks. For a woman who does conceive, damage done by endometrial tissue may increase her risk of a painful pregnancy, premature labor, or Cesarean section. Happily, however, for reasons not fully understood, painful symptoms tend to improve a bit during pregnancy and breastfeeding, even while the underlying disease persists.

In a woman’s later years, estrogen production declines with the change of life that comes at menopause. Symptoms from endometriosis generally tend to improve then as well; however, endometriosis has been found and reported in postmenopausal women and symptoms may return if estrogen is brought back through estrogen replacement medications used to treat menopause symptoms. Again, discussion with an Ob/Gyn is an endometriosis patient’s best course of action.

Symptoms of endometriosis may actually simulate other medical issues, such as pelvic inflammatory disease, ovarian cysts, chronic bladder infection, or irritable bowel syndrome. A definitive diagnosis is made via minimally invasive laparoscopy.

Although endometriosis is a chronic, long-term condition with no current cure, medication and surgery can help to reduce symptoms and the risk of permanent damage to affected organs.

Managing pain is the primary goal of medication. Over-the-counter anti-inflammatory drugs such as ibuprofen (Motrin®) and naproxen (Aleve®) are a first step. If these are ineffective, medications used to treat nerve pain, such as gabapentin and duloxetine, may be prescribed. Because of the risk of addiction, we avoid using narcotics.

The production of abnormal tissue is fueled by estrogen, so medications that reduce estrogen production may also help—including hormonal birth control agents, a hormone antagonist, or an aromatase inhibitor.

At MedStar Washington Hospital Center, we conduct a laparoscopy if symptoms are significant enough that we suspect endometriosis. With the patient under anesthesia, we insert a small camera into the abdomen, usually through a small incision in the navel, then add a few more tiny incisions that allow us to view the pelvis thoroughly.

If abnormal tissue is found, we remove samples for testing. In many cases, we can entirely remove the abnormal tissue during the same procedure. Almost every patient goes home the same day and experiences little to no scarring. In more than 90 percent of cases, recovery time is one to two weeks.

In some cases, when we find that significant damage to vital organs has occurred, more extensive surgery may be needed. For example, serious damage to the wall of the rectum would require a resection and possibly a temporary colostomy. In that case, we would schedule the patient with a colorectal surgeon, and recovery time would be longer.

At one time, surgical removal of the uterus and ovaries was considered the only way to improve endometriosis. Today, with laparoscopic detection and minimally invasive surgery, we can target specific problem spots and avoid many of the complications that come with removal of reproductive organs.

We are getting closer to improved ways to diagnose this condition via a blood test or saliva smear. We are also looking for a genetic marker that may predict which women are at greatest risk for developing endometriosis.

Here at the Hospital Center, our multidisciplinary team is always looking for ways to keep our patients on their feet and enjoying life. We consult with specialists from other disciplines whenever needed; for example, we would perhaps include physical therapy to also address a patient’s pelvic floor problems or behavioral health to help her cope with this chronic condition.

We have the skills, drive, and resources needed to get endometriosis patients on the road to recovery as conveniently and safely as possible.

Despite the current pandemic, please address symptoms without delay. Every woman’s condition is unique, and much depends on how early we make a diagnosis. Endometriosis doesn’t go away, but the sooner it is correctly addressed, the sooner you can live a full life with less limitations.

Our specialists can help.