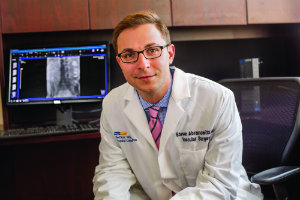 For years, the 38-year-old patient suffered with heavy, swollen lower extremities resulting in chronic venous ulcers lasting several months. The debilitating wounds required compression wraps, dressing changes and antibiotics when needed. After seeing several physicians, many of whom believed cellulitis was the cause, the patient was referred to MedStar podiatric surgeon John Steinberg, DPM. Though the wounds healed faster under Dr. Steinberg’s care, the cause of the ulcers remained uncertain. Dr. Steinberg enlisted the help of MedStar Heart & Vascular Institute (MHVI) vascular surgeon Steven Abramowitz, MD, RPVI. Dr. Steinberg relayed the patient’s history, which included a serious accident more than a decade earlier.

“When I learned this patient had a history of trauma, my first thought was he may have had an occluded inferior vena cava (IVC) filter. IVC filters are often placed after trauma for pulmonary embolism prevention and can be missed or lost in follow-up care,” says Dr. Abramowitz.

Dr. Abramowitz was correct. The patient had been in an accident in 2003 resulting in a broken pelvis, collapsed lung and internal bleeding. He had been treated with a non-retriev-able prophylactic IVC filter. A CT scan revealed an occluded filter, located in the inferior vena cava just below the patient’s kidneys. The device was completely embedded in the wall of the patient’s vessel. Removal would risk of hemorrhage or vessel rupture.

Dr. Abramowitz explained to the patient about endovascular iliocaval reconstruction, an effective treatment in vena caval stenosis and occlusion.

The two-stage procedure began with thrombolytic therapy to soften the thrombus, administered via two puncture sites in the popliteal vein, located behind the knee. Six hours later, Dr. Abramowitz used these access sites and wires, threaded beyond the occlusion, to start reconstruction. He deployed a balloon to disrupt the metal of the old filter. He then placed a large inferior vena cava stent with extensions into each iliac vein (referred to as a double-barrel reconstruction) and deployed additional stents to reconstruct the vessels down to the femoral veins. In total, he placed five overlapping stents.

Dr. Abramowitz says improvements in blood flow are almost immediate. “If a patient makes it over the initial hurdle, long-term results are good,” he explains.

Though it took several months for his ulcers to heal, the patient reports he has had no recurrence of venous ulcers. He also notes significant reduction in the swelling of his lower legs, and no longer needs pain medication.

Currently, Dr. Abramowitz is the only physician at MHVI performing endovascular iliocaval reconstruction. “It is a new procedure and requires good patient indication,” he says. This patient was so young, he will likely see a very long benefit.