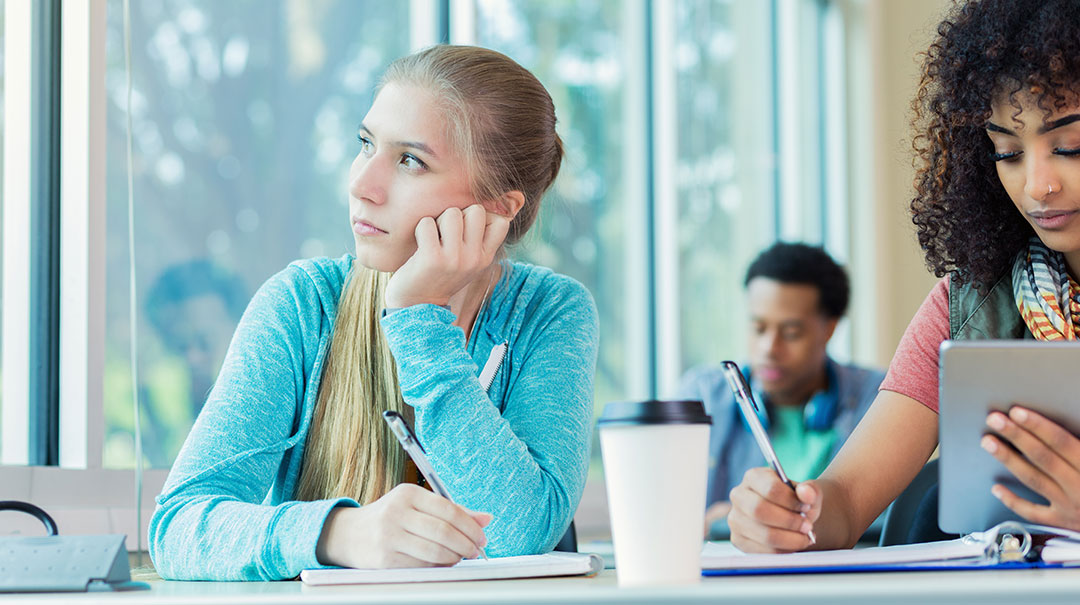 Hormonal changes and the social and academic demands are constant pressures for teens. However, kids with attention-deficit/hyperactivity disorder (ADHD) can be impacted by this dynamic more severely than their peers.

According to Children and Adults with Attention-Deficit/Hyperactivity Disorder (CHADD), a national ADHD resource, the disorder affects 8.4 percent of Americans ages 2 to 18 and 12 percent of teens ages 12 to 17. ADHD is marked by an ongoing pattern of inattention and hyperactivity, often interfering with functionality or development. Common scenarios include frequently forgetting to turn in homework assignments and experiencing an inability to absorb information in class, often resulting in poor exam grades.

Common symptoms of ADHD include the inability to:

Generally, symptoms arise prior to a child’s 17th birthday. But parents often don’t realize the cause of these behaviors, resulting in many kids not receiving treatment through their teenage years. Being aware of symptoms so you can address them with a doctor, however, can result in a proper diagnosis and treatment that can manage your child’s symptoms.

Difficulty concentrating, organizing, and retaining information are common symptoms of #ADHD, which affects about 8 percent of kids. Learn how symptoms are treated. via @MedStarHealth

How ADHD is diagnosed

People are born with ADHD and oftentimes it runs in the family. Many teens outgrow ADHD (about four percent of adults have ADHD), although the hyperactivity, fidgetiness, and distractibility can persist.

ADHD, unfortunately, is underdiagnosed and undertreated, especially in girls. Symptoms of ADHD in girls are often less obvious, as girls who are dealing with these symptoms both inside and outside of the classroom tend to still receive good grades.

To diagnose ADHD, doctors first evaluate a teen’s symptoms by asking the teen, parents, and teacher to rank common symptoms from non-severe to severe using the Conners rating scale, a behavior rating scale used to better understand certain behavioral, social, and academic issues in children ages 6 to 18 years old. If a follow-up test shows symptoms are consistent six or more months later, the doctor may diagnose ADHD. Doctors will sometimes perform additional testing to identify any underlying conditions with similar symptoms, such as learning disabilities, sleep disorders, or metabolic disorders.

ADHD treatment usually starts with cognitive behavior therapy, which treats problems and boosts happiness by modifying dysfunctional emotions, thoughts, and behaviors. We often focus on solutions to teens’ symptoms by encouraging them to learn coping skills—which can include getting enough sleep, mentally accepting the diagnosis, controlling impulses, and seeking support from teachers, family, and friends when it’s needed. Your family practice doctor typically will refer your child to a therapist for this type of treatment.

Numerous medications effectively treat ADHD and have no known long-term side effects, if cognitive behavior therapy isn’t effective. These medications aim to improve chemical imbalances in our body that influence mental health, including neurotransmitters, serotonin, norepinephrine, and dopamine.

Many of my teen patients who went through counseling and received medication come back for follow-up appointments exclaiming how much they enjoy school now and how much better they feel about themselves. These kids see the world brighter and live a more fulfilled life. However, just because teens take medication today doesn’t mean they have to for the rest of their lives. In fact, I find that about 50 percent of people who receive treatment that eliminates all symptoms for six months to one year never need medicine again.

ADHD can severely affect a kid’s ability to learn, do well in school, and socialize. If your teen is experiencing symptoms, don’t hesitate to speak with them about it and seek medical care when necessary.

Want to find out more on dealing with developmental issues in teens and young adults? Click below to learn more about our services.