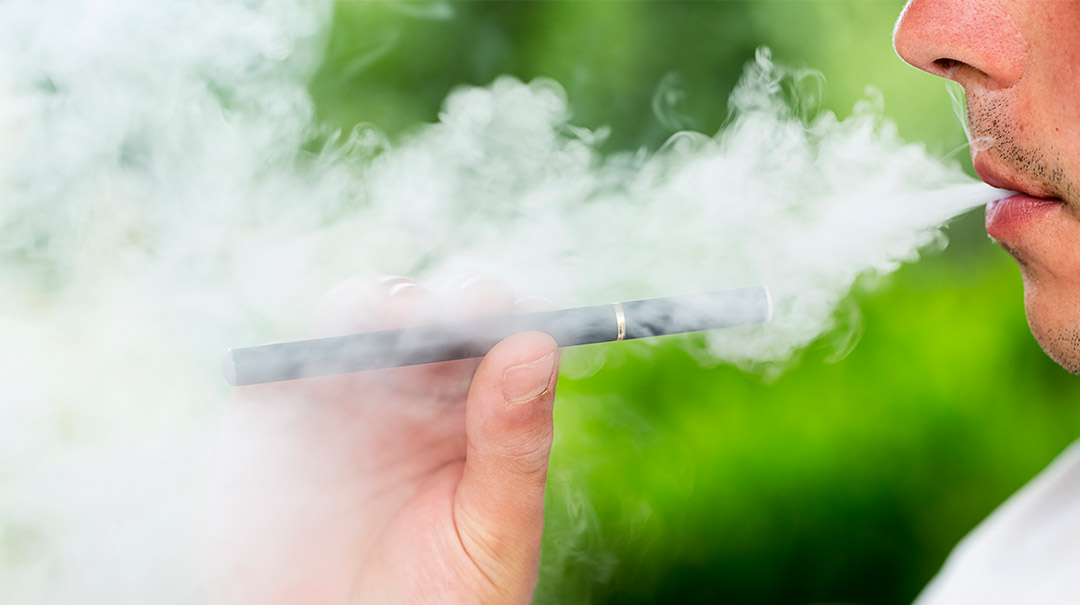 The popularity of vaping continues to soar. From 2017 to 2018, vaping increased by nearly 80 percent among high schoolers and 50 percent among middle schoolers. And while the implications vaping has on people’s lungs are well documented, the effects it can have on dental health are less known.

Vaping is done through devices such as the Juul and Cig-A-Likes and contains nicotine, just like cigarettes. In fact, a JuulPod, which often lasts between four and six days, contains about 20 cigarettes worth of nicotine.

More than 7,000 types of vaping flavors exist, most of which were developed for the food industry—not vaping. While we are aware of potential short-term implications of vaping, the 20- to 30-year health implications are less clear.

The most common dental health implications we see with vaping are irritation of the oral mucosa and higher rates of overgrowth of a fungus called Candida albicans. The overgrowth of this fungus can result in oral thrush, an infection in the mouth that requires treatment with anti-fungal medication.

Additionally, the vape substances that carry nicotine also usually contain glycerin and propylene glycol. While these chemicals aren’t dangerous in and of themselves, they can cause:

Is Vaping Better Than Smoking Cigarettes?

While we are still early in the process regarding research into the long-term implications of vaping, the short-term effects and lack of knowledge are enough for people to avoid it. In fact, the American Head & Neck Society says that the lack of clear scientific evidence regarding the safety and effectiveness of vaping leads the organization to not endorse using e-cigarettes as a safer alternative to cigarettes.

While research is ongoing, we know enough now to not recommend #vaping as safe alternative to #smoking, says Dr. Jonathan Giurintano. https://bit.ly/2W7NtMo via @MedStarWHC

Get Help to Quit Vaping

To help people quit vaping—and smoking cigarettes—we offer smoking cessation programs that provides adults counseling, support, and the encouragement needed to quit. Please speak to your doctor for more information on enrolling in these programs.

The Food and Drug Administration (FDA) only began regulating the e-cigarette industry in 2016. While vaping is regularly advertised as harmless, it is important that people both understand the effects it can have on our health and be on the lookout for what future research might reveal.

To request an appointment with an otolaryngologist, call 202-877-6733 or click below.