Ignoring Coronary Artery Disease Symptoms Could Have Been Devestating

Ignoring Coronary Artery Disease Symptoms Could Have Been Devestating 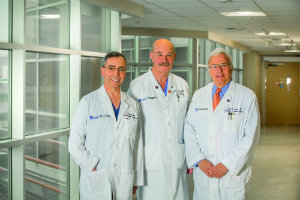 Ignoring Cornorary Artery Disease Signs Could Have Been Devastating

The symptoms, at first, were subtle and easy to dismiss. Burning and chest discomfort—likely acid reflux. A nagging ache in the left shoulder—probably due to past rotator cuff surgery. And for Richard Kief, senior vice president and Chief Philanthropy Officer of MedStar Washington Hospital Center, the symptoms only occurred when he rode his bike. As soon as the 63-year-old stopped exercising, the symptoms disappeared.

As time passed, Kief, an avid cyclist who routinely logged 25 to 40 miles several times a week, noticed the symptoms lingered longer and sometimes occurred at bedtime. He also found it increasingly difficult to ride through the pain.

Finally, during a ride with former teammates last October, Kief realized he could barely keep up the pace for 10 miles. “The burning, the shoulder pain, it was just too much,” he recalls. “One of my teammates told me I should really get this checked out.”

A hospital meeting a few days later involving Stuart F. Seides, MD, FACC, gave Kief the opportunity to share his symptoms with the physician executive director of MedStar Heart & Vascular Institute (MHVI). Dr. Seides recommended blood work and a stress test, both of which were inconclusive, but not enough to deter the experienced cardiologist from further investigation.

“I continued to be troubled by the character and nature of his symptoms even though we didn’t have clear guidance as to what was going on,” Dr. Seides recalls. “So we proceeded with a cardiac CT that showed extensive coronary artery disease.”

Armed with this knowledge, interventional cardiologist Augusto Pichard, MD, performed a cardiac catheterization. “I woke up in the cath lab and Dr. Pichard told me, ‘Richard, we’re finished. We found the problem, we’re admitting you tonight and you’re having surgery tomorrow,’” Kief recalls. “I was surprised,” he continues, “but I knew I was in good hands.”

Specialists at MHVI have high-level skill in both percutaneous coronary intervention and coronary artery bypass grafting so the specific mode of revascularization is customized based on individual patient circumstances. Mr. Kief’s anatomy strongly favored a surgical approach.

Kief’s overall fitness supported a quick recovery and after four days in the hospital, he returned home. He began taking slow, short walks until he started cardiac rehabilitation, a customized program that gradually increases exercise and teaches patients to monitor their heart rate and recognize cardiac symptoms.

“People need to be attentive to all symptoms and seek advice when needed,” stresses Dr. Corso. “For most men, especially those who are active and athletic, if they feel a little something, they think it can’t be anything serious. But in heart disease, little symptoms can be very important. Richard is a very lucky man.”

Kief agrees. “I am so fortunate this was caught in time,” he says. “It was fortuitous that I had that conversation with Dr. Seides when I did and that I was in the right place at the right time. We have the best of the best at MHVI, and I can now speak first hand to that.”

Cardiac rehabilitation is a medically super- vised program that helps improve the health and well-being of people with heart problems. Typically, the program includes 36 sessions and is beneficial for people of all ages in terms of improving health and preventing future heart problems.

“The American Heart Association/American College of Cardiology guidelines recommend participation in a comprehensive outpatient cardiac rehabilitation as a Class I recommendation for all patients who have an acute coro- nary syndrome or who have undergone coronary artery bypass grafting,” says Ana Barac, MD, PhD, FACC, medical director of the cardiac rehabilitation program at MedStar Washington Hospital Center.

“There is plenty of evidence this leads to better outcomes and decreases the chances of subsequent myocardial infarction or death for patients who have had revascularization procedures, including both stents and cardiac bypass,” says Dr. Barac.

The program, located at Trinity Washington University less than a mile from the Hospital Center, offers patients an individualized program that oversees exercise and cardiovascular endurance, all while under the trained eye of an exercise physiologist, physical therapist and physician. Heart rate and blood pressure are monitored during each session, offering patients added assurance should they experience any concerning symptoms.

In addition to physical exercise on a treadmill, stationary bike or rowing machine, cardiac rehabilitation also includes an educational component with nutrition counseling and patient education on how to monitor heart rate, symptoms and pain.