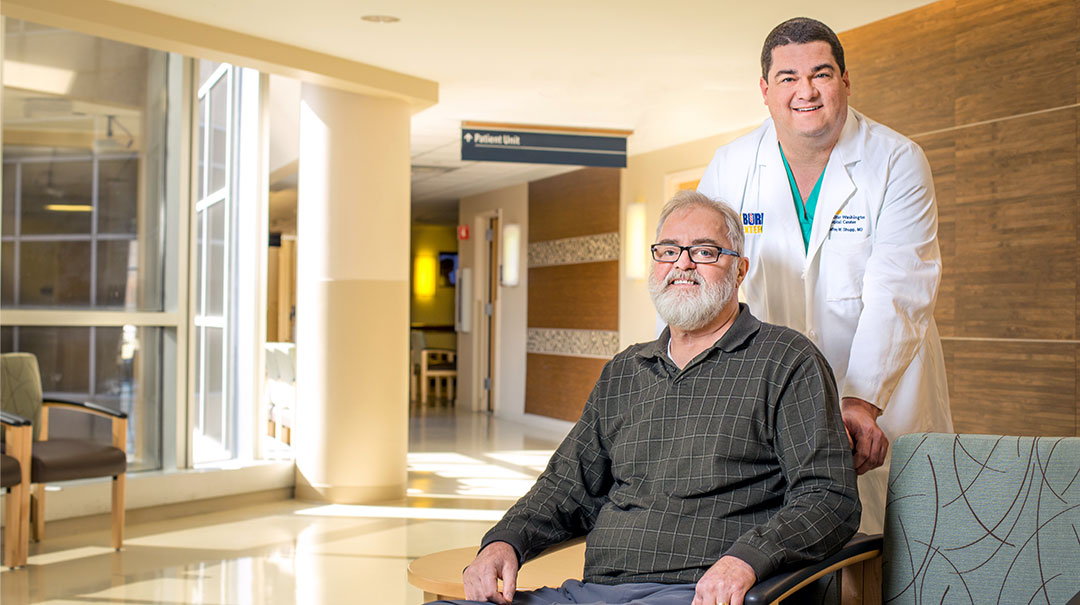 Tug boat captain Jeff Davis spent 40 years shepherding large ships safely through treacherous waters along every U.S. coast. But it was an ordinary motorcycle ride on a summer day in the St. Mary’s Maryland countryside that proved the most dangerous voyage of his life.

When his cycle collided with a larger vehicle, gas spilled and flames alighted. Within seconds Captain Davis’s body was ablaze. Passerby’s helped smother the fire and a state police helicopter loaded Captain Davis aboard for the trip to MedStar Washington Hospital Center—and its renowned Burn Center.

The Burn Center, the only adult burn treatment facility in the Washington area, serves the District, southern Maryland, northern Virginia and eastern West Virginia. Every year, more than 1,000 patients are treated at the center by a multidisciplinary team of experts including surgeons, nurses, nutritionists, pharmacists, rehabilitation therapists and many other allied health professionals.

When Davis arrived at the hospital he was in critical condition. “He had multiple traumatic injuries including broken bones and very deep burns covering more than 50 percent of his body,” explains Jeffrey Shupp, MD, Burn Center director. Working collaboratively, the Trauma, Interventional Radiology and Orthopedic Surgery teams gathered to manage his complex care.

Among his serious fractures was a broken pelvis—an injury that can lead to difficult-to-control bleeding. So Davis was first rushed to Interventional Radiology for a procedure in which coils are used to block bleeding vessels in order to prevent further blood loss.

Once this threat was thwarted, the burn team turned to tackle the third and fourth degree burns that covered Davis’s body from his waist down. The damage was so severe it reached into the underlying bones, muscles, tendons and nerve endings.

“With a burn of this degree, burn shock can be lethal,” Dr. Shupp says. “Captain Davis required over 20 liters of fluid to support his cardiovascular system during the first 24 hours in the hospital. Once we get a large burn through this initial resuscitation, we need to begin debridement to remove burned tissue to stop inflammation and control infection.”

Davis has no memory of those early days—nor the months of intensive care that followed. But he has read his wife Bonnie’s journal—a daily heart-wrenching account of the experience. That’s where he learned about his round-the-clock care and dozens of surgical procedures.

Bonnie also wrote about a sudden, unexpected wrinkle in her husband’s recovery. Many weeks into his hospitalization, Davis developed internal bleeding from an unknown source.

"It was a mystery we needed to solve quickly,” says Dr. Shupp. “But we were able to identify that the bleed was in his colon where he previously had surgery. Dr. Laura Johnson and I had to remove much of his large bowel to stop the bleeding.” It was a setback—but Davis continued to defy the odds.

“It’s strange,” Davis says now. “I think I had this recurring dream. I felt as if I was in a shallow pool with other people floating and we were in pain. We could talk with one another and to people who came and went. I must have been a bit aware of all the people helping me get better.”

The Benefit of Research

Three months into his hospitalization, it was time to graft new skin tissue on his wounds. Multiple techniques were used including cadaver tissue and an innovative new tool available in just a few hospitals nationwide.

"We have been involved in clinical trials testing a medical device called ReCell® and received a compassionate waver for Captain Davis,” Dr. Shupp explains. “ReCell® uses a very small sample of the patient’s skin to reconstitute cells into a spray to cover large areas. It’s an important additional grafting technique for patients like Captain Davis who don’t have enough healthy skin for standard grafting.”

When his wounds were adequately healed, Davis began rehabilitation. Months of sedentary hospitalization, stiffening of muscle and loss of nerve sensation made movement difficult. And his 6’ 1” frame had withered to 120 lbs."

When I first left the ICU, just getting into my wheelchair was a big feat,” he says. “But the therapists took good care of me and helped get me stronger. Everyone at the hospital was wonderful and I know it’s a miracle I’m alive. They are great people who became my friends.”

“Mr. Davis’s recovery is a testament to the multidisciplinary team taking care of him,” says Dr. Johnson. “Everyone collaborated to help him make the recovery he has; he and his wife are minor celebrities every time they come back for a visit.”

On December 3, 2016, more than 18 months after he first arrived, Davis was discharged. “A van picked me up and took me home to St. Mary’s,” he says. “My wife, a friend and my dog Choco were waiting for me. When I left, Choco was just a puppy, but he remembered me!”

With home nursing and physical therapy, and his wife “Bonnie’s remarkable strength, things are getting better,” he adds. “My wife and I were even able to go to Florida for a month and are planning to go back.

“I know this wasn’t the retirement we dreamed of and I don’t have great expectations. I just want to be strong enough to leave my wheelchair behind and walk unassisted into a restaurant or a friend’s home. Thanks to many people, I may just get there.”