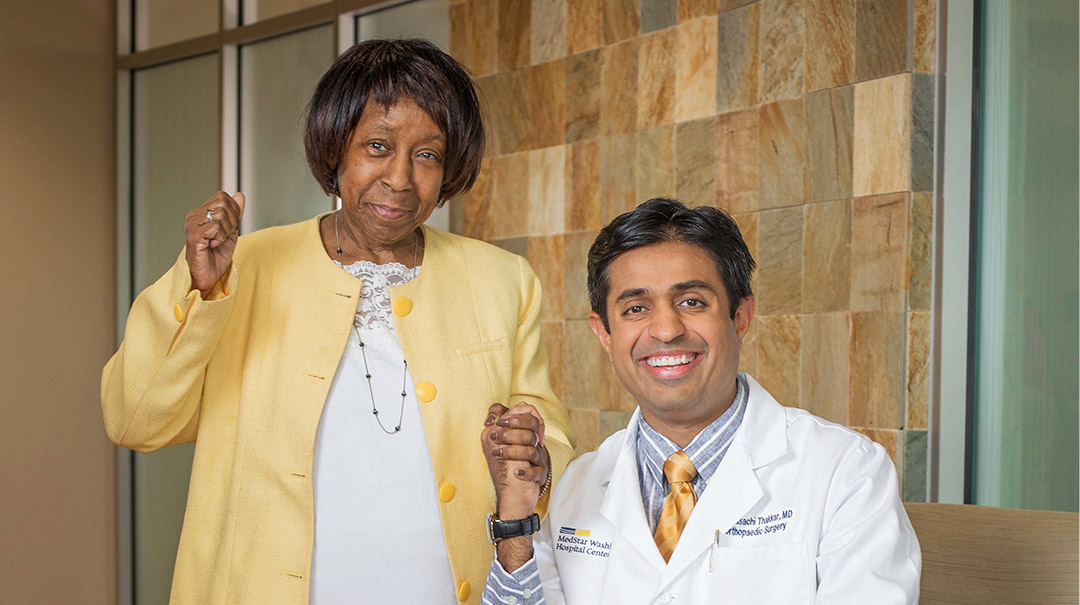 This Christmas will be extra-special for Barbara Lott. For the first time in several years, the 68-year-old Washington, D.C., resident will be cooking dinner and desserts for her family and friends, free of the arthritis pain in her knees that had kept her from standing unassisted even short periods.

Ms. Lott’s arthritis started innocently enough about 14 years ago—some occasional pain in her right knee that she attributed to having been on her feet a lot. Over-the-counter medications worked for awhile, but the pain gradually grew worse, defying cortisone shots and other treatments.

Eventually, both knees were affected. But Ms. Lott was undaunted.

“I wanted to stay active and do as much as I could,” she recalls. “As I told my friends, ‘no pity party for me!’”

By early 2017, however, Ms. Lott’s arthritis appeared to have gotten the best of her. With both knees now deformed by pain, she was dependent on a rolling walker to get around her house. Even her never-give-up spirit began to wane, making her dubious about pursuing surgery to correct the problem.

Ms. Lott even admits that she almost skipped her appointment to see Savyasachi C. Thakkar, MD, a specialist in adult hip and knee reconstructive surgery at the MedStar Orthopaedic Institute at MedStar Washington Hospital Center.

But she decided to go, and she’s glad she did.

“I immediately felt comfortable with Dr. Thakkar,” says Ms. Lott. “He was very friendly, yet he didn’t talk down to me.” 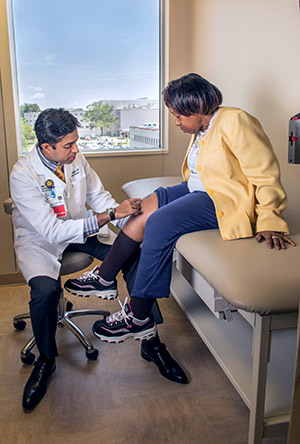 Dr. Thakkar diagnosed Mrs. Lott’s condition as “windswept knees,” an arthritis-related deformity that leaves both knees severely out of alignment. The right side was knock-kneed and the left side was bow-legged. Due to her unique problem, Dr. Thakkar suggested performing surgery on both knees at the same time, a procedure called “bilateral total knee arthroplasty,” which would reduce surgical risks and speed her recovery. The degree of deformity required her to undergo bilateral simultaneous total knee arthroplasty, as operating on just one knee would not provide the maximum functional benefit that she could achieve.

"Everything he said made sense to me,” she adds. “I wouldn’t have done the surgery without him.”

After some initial physical therapy evaluations confirmed that her knees were strong enough for the surgery, Ms. Lott joined other orthopaedic patients for a pre-operative joint replacement class designed to educate patients about what would take place during the procedure. She also met with special social workers called Post Acute Care Coordinators (PaCC) who arranged for her rehabilitation needs and home care needs after surgery. Dr. Thakkar also made sure he and his assistant were always accessible to answer questions.

The procedure to correct the deformity in Ms. Lott’s knees lasted about three hours. Another welcome surprise awaited when she awoke from anesthesia without experiencing any post-operative pain.

“That surprised even the nurse,” she says with a laugh. “She gave me a Tylenol later on, but to this day, that’s all I’ve really needed.”

Ms. Lott’s recovery unfolded exactly as planned. Within six weeks of her surgery, Ms. Lott could walk short distances without a walker. Three months post-surgery, she could walk unassisted. Her overall health improved along the way, as did her anticipation about resuming those neglected holiday cooking traditions.

"I’m able to stand, do my grocery shopping, and walk from one end of the store to the other,” Ms. Lott says proudly, adding that she also keeps Dr. Thakkar’s business card in her wallet to share whenever she hears of someone else being debilitated by arthritis in the knees and the hips.

“I know what kind of pain they’re having, and how it controls your life,” she says. “And you really don’t know how much it does until you have the surgery.”

Schedule an appointment or call 202-877-3627 to see if you could be a candidate for arthroscopic knee surgery.