Minimally Invasive Skull Base Surgery Is Teamwork at Its Best

Minimally Invasive Skull Base Surgery Is Teamwork at Its Best 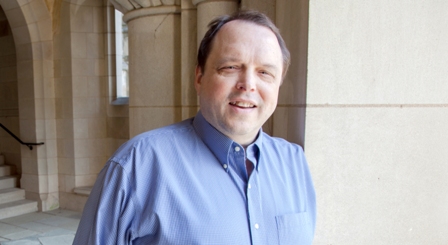 In late May 2015, an intense nosebleed in one nostril alarmed Greg Berger, age 58, enough to seek care at MedStar Georgetown University Hospital’s Emergency Department (ED). Following treatment in the ED, Greg was referred to Bruce Davidson, MD, chairman of the Department of Otolaryngology, for further evaluation.

“Dr. Davidson looked at me and immediately ordered a CT scan,” Greg recalls. “When I returned to his office, he brought in Dr. Timothy DeKlotz to meet with me and discuss next steps. It was a seamless introduction to the person who would become a key member of my future treatment team.”

Timothy R. DeKlotz, MD, a board-certified ear, nose and throat surgeon, is an expert in diagnosing and treating skull base disorders such as cancers of the nasal cavity and pituitary tumors, among other disorders. He is part of a group of multidisciplinary, fellowship-trained specialists at MedStar Georgetown, with expertise in state-of-the-art instrumentation to perform minimally invasive skull base surgery.

Following his CT scan, a biopsy revealed that Greg had an olfactory neuroblastoma (ONB), a rare but treatable cancer of the upper nasal cavity and skull base, the bone deep between the nose and brain, and between the eyes. The cancer extended into the brain along the nerve responsible for smell, but did not appear to be extensive. Nosebleeds are a common symptom of ONB.

The skull base separates the brain from other facial structures. Blood vessels that supply the brain with oxygen and nerves vital to vision, smell, hearing, facial movements and breathing are part of this complex space, according to Dr. DeKlotz. “Minimally invasive skull base surgery is a relatively new field that has taken off in the last 10 years,” says Dr. DeKlotz. “Sophisticated surgical MedStar Georgetown is one of only a few hospitals in the country to offer this sophisticated alternative to traditional skull base surgery, according to Amjad N. Anaizi, MD, a minimally invasive brain and skull base surgeon who was part of Greg’s surgical team.

“The traditional surgical approach to remove an ONB involves an incision from ear to ear and a craniotomy, where we temporarily remove the large bone above the eyes to access the brain. With an endonasal endoscopic technique, no incision is necessary. Even the complicated process of removing the tumor and reconstructing the skull base can be achieved through the nostrils,” Dr. Anaizi says. “It’s definitely a team effort.”

The benefits of minimally invasive skull base surgery for the patient include faster recovery, less risk of stroke and no disfigurement or scarring, according to Drs. DeKlotz and Anaizi. Post-surgery, Greg is adjusting to losing his sense of smell, an expected side effect from his surgery, which also has affected his ability to taste. But he is now cancer-free.

“I felt from the beginning that I was in the best of hands. My surgery was remarkable and I am immeasurably grateful to the whole team at MedStar Georgetown,” says Greg.

To learn more, visit MedStarGeorgetown.org/SBC or call 202-444-7035 to make an appointment.