Next Steps for Cardiac Stem Cells

Next Steps for Cardiac Stem Cells 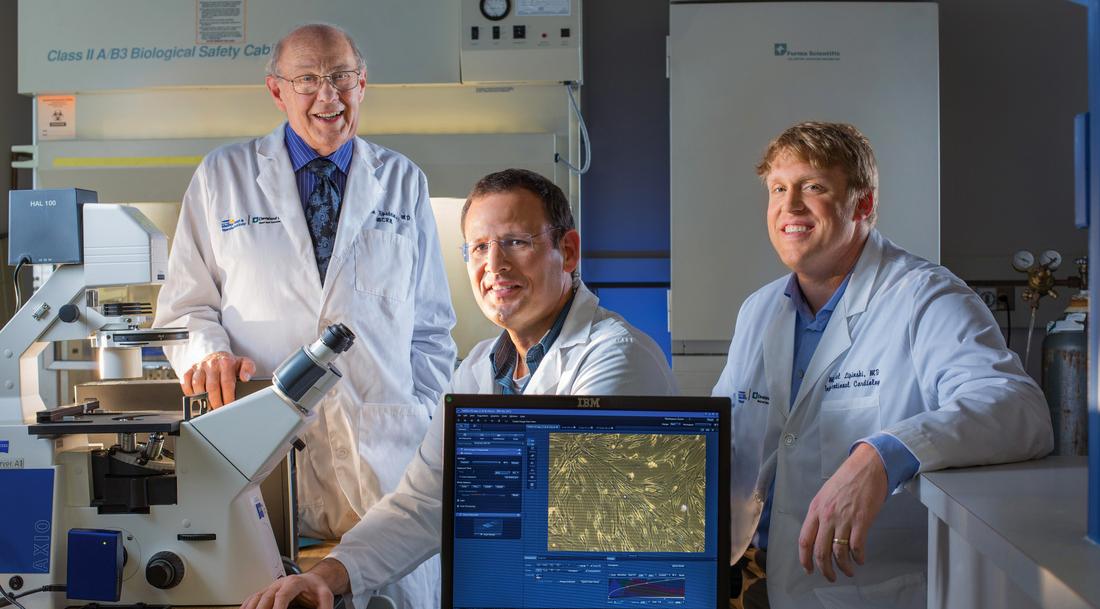 When stem cell research targeted to cardiovascular disease first made headlines almost two decades ago, many speculated it would create a new era of medical therapy for acute myocardial infarction and heart failure patients. However, despite encouraging preclinical study results and enthusiasm emanating from initial small clinical trials, overviews of the results of all published major randomized trials conducted through 2012 were disappointing.

The challenges forced new approaches to cardiac stem cell therapy, which are reflected in a new clinical trial getting underway at MHVI this winter. The trial will determine the effects of intravenous administration of a novel stem cell in patients with chronic non-ischemic cardiomyopathy. Dr. Epstein, an internationally recognized authority on stem cell therapeutics targeted to cardiovascular disease, says, “These new strategies have reinvigorated research in stem cell therapies, particularly for cardiac patients.”

To determine why the first stem cell trials were not providing the anticipated therapeutic potential, “all variables, such as which stem cells were used, and how they were developed and administered, were open to consideration,” says Dr. Epstein.

A key issue was the use of autologous stem cells in all previous studies. Studies demonstrated these “old” stem cells are functionally defective when compared to stem cells obtained from young healthy individuals. So harvesting a healthy young donor’s bone marrow and growing the resident stem cells might produce more robust cells.

However, giving a patient allogenic stem cells raised an important issue: whether such cells will be rejected by an immune response. But research showed mesenchymal stem cells (MSCs), a type of “adult” stem cell, “have been designed by nature to be stealth bombers,” explains
Dr. Epstein. “They express molecules on their surface that prevent the body from recognizing the cells as ‘foreign,’ so the patient does not reject the donated MSCs.”

To further explore and refine potential stem cell cardiovascular therapies, MHVI expanded the translational research team to include Michael Lipinski, MD, PhD, an expert in molecular biology and scientific lead for preclinical research at the MedStar Cardiovascular Research Network, and Dror Luger, PhD, an expert in immunology and inflammatory responses. “By bringing together these diverse areas of expertise, we forged a team with the potential to produce research that could lead to important breakthroughs in understanding how stem cells might work and thereby provide more successful treatment of patients with cardiac disease,” says Dr. Epstein.

CardioCell, a San Diego-based stem cell company focused on stem cell therapy for cardiovascular disease, found that MSCs grew faster and showed improved function when cultured in a reduced oxygen environment. “Stem cells typically grow in the body, in bone marrow and other tissues, in a low oxygen environment—only five percent oxygen, as opposed to room air, which is about 20 percent,” explains Dr. Lipinski. “All previous stem cell trials used cells exposed to, and grown under, room air oxygen conditions.”

Using CardioCell’s low oxygen-grown MSCs, the MHVI scientists demonstrated biologically important effects occurred, even when the MSCs were administered intravenously. This mode of administration was previously rejected by scientists who thought cells would be trapped in the first capillary bed they traversed—the lungs—and never reach the heart.

However, the MHVI team demonstrated a small percentage of these IV administered MSCs did reach the heart, where they could exert beneficial effects. The cells seek out inflamed cardiac tissue after a heart attack because “they upregulate receptors that allow them to be attracted to and penetrate inflamed tissue in high numbers,” says Dr. Luger.

The investigators also found the cells residing in other tissues could provide other benefits. “It has been shown that a heart attack activates the immune and inflammatory systems, including those in the spleen,” explains Dr. Luger. “The systemic anti-inflammatory effects produced by MSCs in the spleen, lungs and other tissues caused by the molecules secreted by the MSCs could exert positive effects as well.” Dr. Epstein added that “such anti-inflammatory effects could also benefit the excessive inflammatory activities that exist in many heart failure patients.”

For the clinical heart failure trial, MHVI is partnering with CardioCell, which will grow and provide stem cells already used in Phase I and 2a clinical trials and approved by the Food and Drug Administration.

As an extension of their stem cell work, the MHVI investigators are building on the fact that any beneficial effect of adult stem cells will not derive from their transformation into heart muscle, but rather from the molecules they secrete; these, in turn, stimulate pathways favoring tissue healing. The team is investigating the use of liposomes as therapeutic delivery vehicles for these secreted products, which include those with anti-inflammatory and angiogenesis activities.

If successful, using MSCs for anti-inflammatory and immune-modulatory effects could have implications for many different diseases, including arthritis and autoimmune diseases like rheumatoid arthritis. Dr. Epstein cautions that a great deal of research is yet to be done before such applications can be routinely used to treat patients with these conditions. For now, they hope the current studies in heart failure patients will demonstrate effectiveness. “If so,” Dr. Epstein says, “it changes the whole playing field for stem cells.” 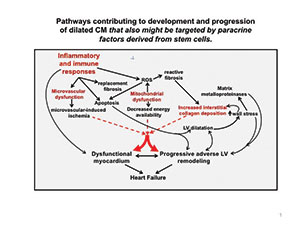 Pathways contributing to development and progression of dilated CM that also might be targeted by paracrine factors derived from stem cells.