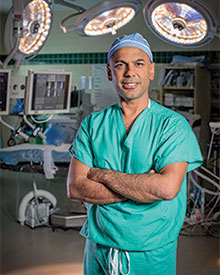 Joel Patton was the quintessential picture of health, boasting a strong body and mind. An IT professional working on his PhD, the 35-year-old was a personal trainer during his off hours. In May 2016, his left foot began hurting, and he assumed it was an overworked muscle. When numbness and tingling followed, and he began walking differently, Mr. Patton sought medical advice.

“By then, Mr. Patton’s left foot was ischemic—rubric, red and cold to the touch,” says Dr. Malik. It required immediate treatment.

“When Dr. Malik described the blood clot and noted that amputation was a possibility,” says Mr. Patton, “it was a horror story coming true.”

A thrombosis this severe is rare in young adults, Dr. Malik says. He started Mr. Patton on a heparin drip and began diagnostic tests. “A CT-angiogram confirmed extensive thrombosis at the left popliteal artery,” Dr. Malik says. “Blood flow was restricted from the knee to his foot.”

The thrombosis was so extensive, and had gone untreated for so long, that finding options for bypass was difficult. “Endovascular/minimally invasive surgery wasn’t possible, and open surgery was risky," says Dr. Malik. "In an open procedure, we might have been able to take a piece of vein from above the popliteal artery, remove the clot and create a bypass. But the risk of failure was great.” 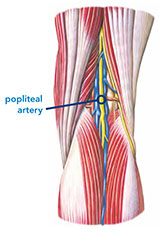 “Other surgeons might have opted to bypass,” Dr. Malik says. “But I thought we should sit tight and watch.”

Within a few days, some feeling returned to Mr. Patton’s foot.

“There was some improvement—the blood thinner was doing its job,” says Dr. Malik, but the clot’s cause remained unclear. A complete work up, including an MRI, pointed to a rare condition called popliteal artery entrapment syndrome. Mr. Patton’s muscles and tendons near the knee were compressing the popliteal artery, restricting blood flow to his lower leg. “The muscle band was not in the correct position,” Dr. Malik says. “Because it was a birth anomaly, we knew it would also be present in his right leg.”

The condition is most often seen in young athletic patients with no other vascular problems. Their workouts enlarge the calf muscle, resulting in compression of the artery.

Dr. Malik believed corrective surgery to release the entrapped muscle would provide a cure for Joel. 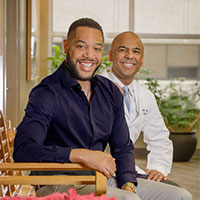 “I entered through the back of the knee, and resected the muscle band,” he says. “We then performed an angiogram to visualize blood flow, and immediately saw tremendous improvement, from just 20 percent to 80 percent. A month later, I performed the same procedure on the right leg."

The surgeries were successful, and Mr. Patton is in physical therapy to regain his strength.