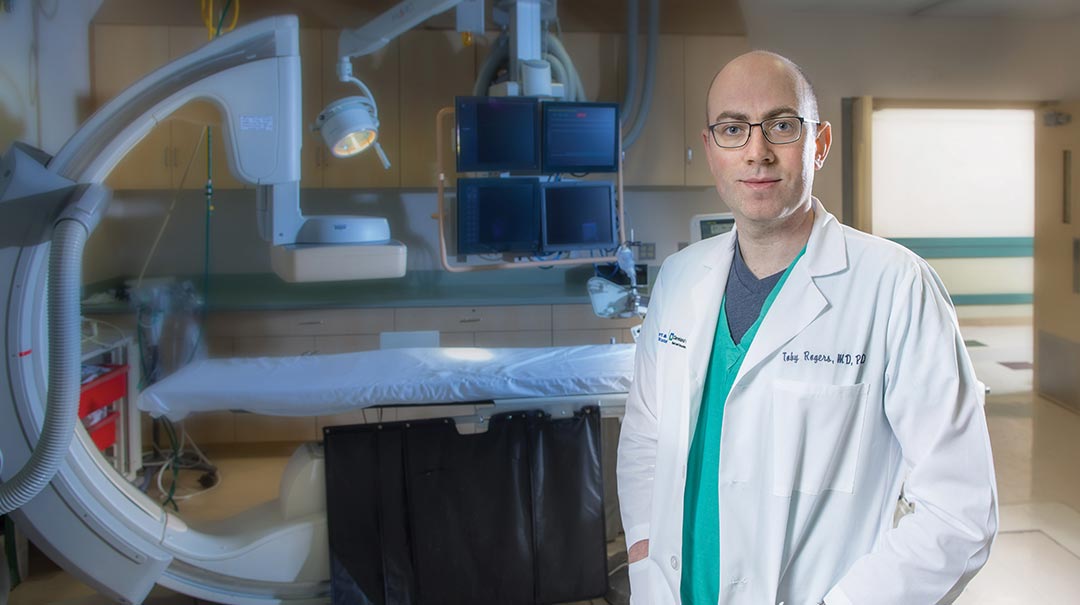 Transcatheter aortic valve replacement (TAVR) is a minimally-invasive treatment for patients with aortic stenosis, a common condition in older adults caused by progressive tightening of the aortic valve, the main heart valve through which blood is pumped to the rest of the body.

Traditionally, replacing a tight aortic valve required open-heart surgery, which involves stopping the heartbeat, removing the old heart valve, and sewing in a new one. In contrast, TAVR replaces the old valve by threading a new valve through an artery in the leg all the way to the heart, and then opening the new valve inside the old one. TAVR is much less invasive, does not require general anesthesia, and the recovery after the procedure is much faster than surgery.

TAVR has come a long way since it was introduced to the U.S. in 2007. However, the medical community still has work to do widen patients’ access to TAVR across the U.S.

LISTEN: Dr. Rogers discusses the future of TAVR in the Medical Intel podcast..

How TAVR Has Improved

TAVR technology has improved significantly over the last decade. In fact, we are now using the third generation of TAVR valves. The TAVR device companies have worked with cardiologists to develop three different iterations of the technology, each better than the last. Some of the changes that have been made include:

The experience doctors now have with TAVR has also led to the procedure becoming safer and more effective. When we first started TAVR, we used general anesthesia and an ultrasound probe in the esophagus, so that we could closely monitor the heart during surgery. But with experience, we learned that these things weren’t necessary.

Nowadays, we perform TAVR using sedation rather than general anesthesia. Additionally, we perform the whole procedure using X-ray to guide the TAVR, which is much less invasive.

#TAVR to treat people with #aorticstenosis has come a long way over the years. Through experience, doctors have made it less invasive with much shorter recovery time. https://bit.ly/2Hvd1yA via @MedStarWHC

What Still Can Be Improved About TAVR

One thing that we can improve upon is our ability to treat aortic valves that become leaky rather stenosed, which means blocked. While we have great devices to replace TAVR valves that become tight over time, we are still in the process of developing a minimally invasive surgery to address leaky ones. In fact, MedStar Washington Hospital Center is one of two hospitals in the country that is testing a new TAVR heart valve to replace leaky ones.

One challenge we still have with TAVR is access to this life-changing treatment. People in rural areas, far away from TAVR hospitals, are less likely to have access to it because it’s still a procedure limited to doctors in specialist centers. Our hope is that, over time, TAVR becomes more widely available outside large cities in the U.S., or we find ways to make it easier for individuals to travel to hospitals that can perform the surgery.

One way to accomplish this is to educate more doctors about the effectiveness of TAVR. This technology is changing rapidly, so doctors who perform TAVR have to work harder to help other doctors understand the clinical trial data and keep up with the technological advancements.

Compared with open heart surgery, TAVR results in faster recoveries and fewer complications for people with aortic stenosis. Our hope is that in years to come, more people will be able to experience the benefits of TAVR as it becomes more widely available throughout the U.S.