Adrenal insufficiency (AI) is an endocrine or hormonal condition in which the adrenal glands fail to produce sufficient amounts of steroid hormones. The main hormone affected is cortisol, a hormone that plays an important role in helping the body respond to stress. However, other hormones, such as aldosterone and androgens, are also often affected.

It can present itself in one of two ways:

The cause is determined by the mechanism of the disease. The majority of cases of primary adrenal insufficiency, or Addison’s disease, are caused by an autoimmune disease. When this happens, the body’s immune system attacks its own cells, tissues, and organs, damaging the adrenal glands and inhibiting them from producing cortisol. Other causes include:

Secondary adrenal insufficiency is caused by complications in the pituitary gland that cause a lack of adrenocorticotropin (ACTH) or corticotropin-releasing hormone (CRH). These hormones are responsible for signaling for the production of cortisol. Without these hormones, the pituitary gland will not be stimulated to make cortisol, and the body will become deficient.

Symptoms can develop gradually and may go unnoticed until a stressful event.

Some of the most commonly experienced symptoms include:

Other signs and symptoms associated with this condition include:

Call a doctor if you notice any of these signs and symptoms. A healthcare professional will be able to tell you if they are the result of adrenal insufficiency or another medical condition.

What to expect at your appointment

During your appointment, your doctor will ask you questions regarding your symptoms as well as your medical history. If your doctor suspects adrenal insufficiency, he/she will prescribe one or more of the following tests in order to make a diagnosis:

The goal of treatment is to achieve a daily hormone balance in the body. This is done by replacing the hormones that the adrenal glands are unable to make.

Certain situations, like surgery, pregnancy, illness, and severe injury, may place individuals at an increased stress level. These individuals may need extra care and additional treatment in order to recover. It is important to communicate with all healthcare providers in order to receive a treatment plan that is tailored specifically to one’s current life situation and the specific diagnosis.

Outlook and prognosis for individuals with adrenal insufficiency

If treated properly, individuals can live long, healthy, and active lives. As with any chronic condition, to avoid serious health complications, it is important to responsibly self-manage the condition, which involves taking medications as prescribed and working with physicians to adjust medications as needed. Proper treatment requires comprehensive care from adrenal experts. Seeking care for adrenal insufficiency in a multidisciplinary clinic provides significant advantages to patients. 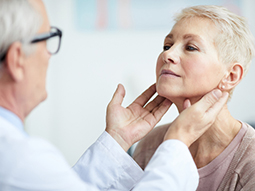 Getting the care you need starts with seeing one of our endocrinologists.