Fibroids are benign tumors of the uterus. They are also called leiomyomas or myomas. Uterine fibroids are the most common tumors of the female genital tract and the leading reason for hysterectomy in the U.S. Fibroids occur in over 50% of women by the age of 50, although most do not cause symptoms or require treatment.

Fibroids grow over time. How quickly growth occurs varies greatly from patient to patient. However, hormonal changes cause fibroids to stop growing once a woman has reached menopause.

What are the symptoms of fibroids?

While fibroids may appear in patients in their twenties, most patients do not experience any symptoms until their late thirties or forties. Many patients will never experience symptoms. For those that do, symptoms will vary based on fibroid type and severity.

A combination of genetic factors and the interaction of various hormones and growth factors appear to lead to a fibroid’s development. However, the exact cause of fibroids is still not fully understood.

African-American women are over three times as likely to develop fibroids as Caucasian women, an increased risk that may be due to genetic differences. There is some variation among other racial groups.

While the link is not definitive, some research suggests that high blood pressure and obesity may contribute to fibroid growth.

MedStar Health offers diagnosis and treatment of uterine fibroids. Fibroids, which are non-cancerous growths in the uterus, are made of muscle and can develop within the uterine wall or attach to it. Fibroids usually start out about the size of a pea and often grow when women are in their 30s and 40s.

How are fibroids treated?

If fibroids are not causing symptoms, surveillance may be the only care required. If fibroids are creating health issues, there are several non-surgical and surgical treatment options.

For many years, the most common form of treatment for fibroids was a hysterectomy (surgical removal of the uterus); however, recent advances in medical technology and surgical techniques have led to the development of less invasive treatments that allow a woman to keep her uterus.

Treatment options for uterine fibroids include:

A hysterectomy is an operation to remove the uterus. This procedure may be necessary for a variety of reasons, including painful uterine fibroids, a prolapsed uterus, cancer of the pelvic region, or endometriosis. A hysterectomy is often a last-resort option, after other treatment options have not been successful. Depending on the reason for the hysterectomy, either a portion of the uterus will be removed, or it will be removed entirely.

At MedStar Health, our gynecologists are trained in performing minimally invasive hysterectomies, so you are back on your feet faster, pain-free.

Some patients need pelvic reconstruction surgery after a previous surgery to correct a urogynecologic condition. Perhaps you had surgery for cancer in the pelvic region or needed major surgery for another reason. In any case, if you are experiencing symptoms such as urinary incontinence or pelvic pain, you may be a candidate for pelvic reconstructive surgery. Our urogynecologists have vast experience performing these procedures using minimally invasive approaches. 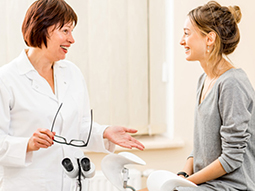 Getting the care you need starts with seeing one of our urogynecologists.

At MedStar Health, our gynecologists coordinate care with your primary care physician to make sure you receive the best care over the long term. Learn more.