Keeping Patients Active With the Right Approach to Elbow Surgery

Keeping Patients Active With the Right Approach to Elbow Surgery 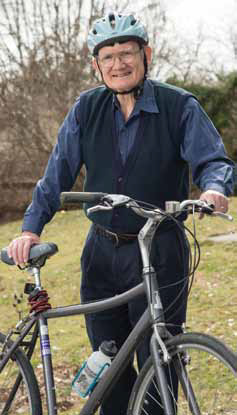 The avid cyclist was out for a ride in the woods in November of last year when his bike drifted off a path obscured by leaves and jackknifed. He was thrown to the ground, breaking his arm.

“It was a pretty sharp pain when I hit the ground,” Richard says. “I actually thought about getting back on the bicycle, but I was feeling enough shock I thought that wouldn’t be a good idea. So, I called my daughter and got a ride home.”

Not one to slow down, the retired engineer had planned to read at his church that evening and went on as scheduled. But, the next morning, he knew he needed to head to his local emergency room when the pain wouldn’t subside. Doctors there recommended setting his arm, but Richard wanted a second opinion. That led him to the MedStar Orthopaedic Institute at MedStar Georgetown University Hospital.

“Most patients know something is wrong, because when they try to straighten their arm, they can’t do it and it’s extremely debilitating,” says MedStar Georgetown orthopaedic hand surgeon, Curtis Henn, MD. “They almost can’t do anything with their arm. There is a lot of swelling and it’s very painful.”

Richard had a displaced fracture at his elbow, rendering useless the muscle used to straighten his elbow. Dr. Henn recommended a surgery called open reduction and internal fixation of an olecranon fracture.

It restores proper alignment of bones, allowing movement of the elbow while the fracture is healing. This approach prevents joint stiffness. Without surgery, his elbow would be in a cast for four to six weeks, which could lead to profound and permanent elbow stiffness.

“Of all the joints in the body, the elbow is one most prone to stiffness after the shortest period of time,” explains Michael Kessler, MD, chief of Hand and Elbow Surgery in the Department of Orthopaedics at MedStar Georgetown. “Addressing this injury early with surgery allows patients to move their elbow right away. If you don’t do that, once the stiffness sets in, you can get stuck, and the only way to release that stiffness is another surgery.”

Richard’s operation was fairly standard, lasting less than two hours. Seven screws and a plate were used to put his elbow back together and he was out of the hospital that day.

Richard wore a splint for two weeks, but was able to write within a week. Ten days after surgery, once his postoperative dressing was removed, he began working on elbow motion through physical therapy. Three months later, his elbow was nearly back to normal, and his incision healed so well the scar is barely visible.

“This can be a home run of a procedure because patients can regain full motion and can get back to doing what they want to do, once the fracture is healed,” Dr. Henn explains.

Richard’s main focus was to get back on his bike. “We see a lot of patients like him who are still very active,” says Dr. Henn. “Part of our role is to help them stay active, which in turn keeps them healthy.”

Richard says he is working his way back to exercise. “I’m using a stationary bike now, but it’s nowhere near as much fun. I think, when the weather eases, I will give serious consideration to getting back on the bicycle, and I thank the great service I received at MedStar Georgetown for making that possible.”

To learn more about hand and elbow surgery at MedStar Georgetown, call