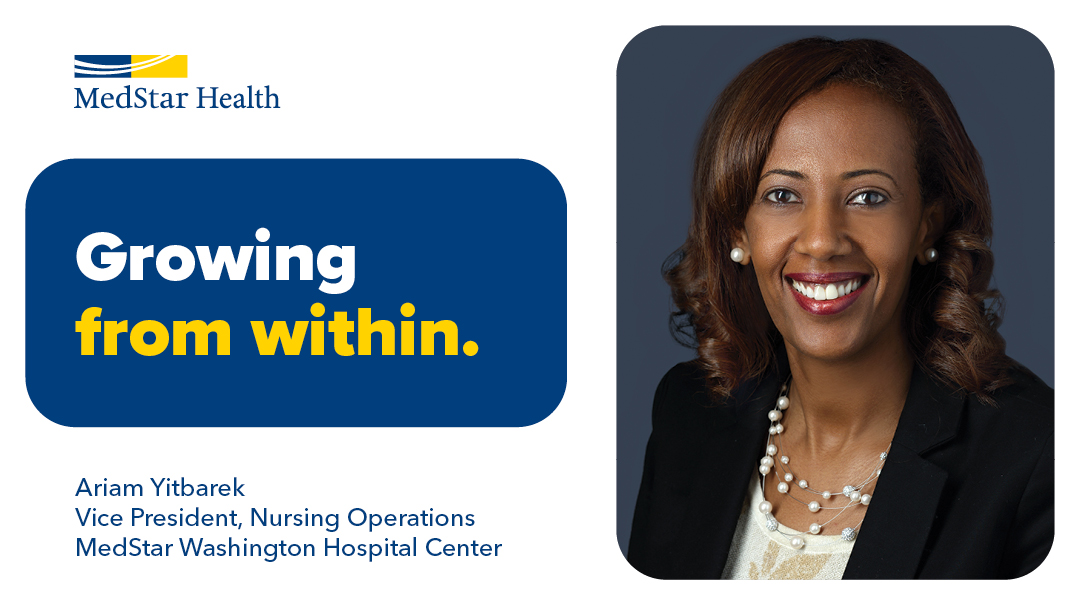 More than two decades ago, Ariam Yitbarek came onboard at MedStar Washington Hospital Center as a nurse in the Cardiac Surgery Step-Down Unit and loved that patient population. She had ambition to move up, however, and was always ready to take advantage of educational opportunities.

“I loved how supported I was and appreciated that MedStar Health offers a lot of development opportunities,” said Ariam.

After a year and a half in her first position, she became a clinical manager in the same department. Five years later, Ariam moved up to the position of nursing director on the heart failure unit. She says she kept an eye out for how she could be of service, helping to provide interim coverage on other units in cardiac services. This was around the time she completed her master’s degree in Health Care Administration from George Mason University.

In 2009, Ariam began serving as interim senior nursing director of surgical and oncology services, which became permanent nine months later. “I took on roles where I was learning a lot about service lines I had no clinical experience with,” said Ariam. “I also looked to leaders and peers whom I learned from and who have guided me throughout my career. And I took full advantage of tuition reimbursement.”

Excelling in that position, Ariam then transitioned into a position created for her: senior nursing director for ambulatory services and women’s and infants’ services. From 2013 to 2017, Ariam covered other service lines as well, and added emergency services to her portfolio. In mid-2019, Ariam was promoted to her current position, vice president of nursing operations. She says she appreciates the encouragement she has received from Chief Nursing Officer Tonya Washington, who is a mentor and a trusted friend. This gives Ariam the motivation to mentor others. She sees her role as having an impact and leaving a legacy wherein those she leaves behind have the tools to seamlessly succeed her. She says it is important for leaders to provide tools, knowledge, and resources, and to let people learn from their decisions.

Finally, Ariam believes the key to success is looking at each of our roles as being a part of One Team.

“Regardless of your role in this hospital, we all impact patient care,” said Ariam. “At any level throughout the organization, we can tarnish the reputation of the hospital or we can look at ourselves as representatives of the hospital and say ‘My success is its success’ and be mindful of how we’re adding to that. I am truly proud to be part of this amazing organization. One Team!”


Looking for a new career opportunity?