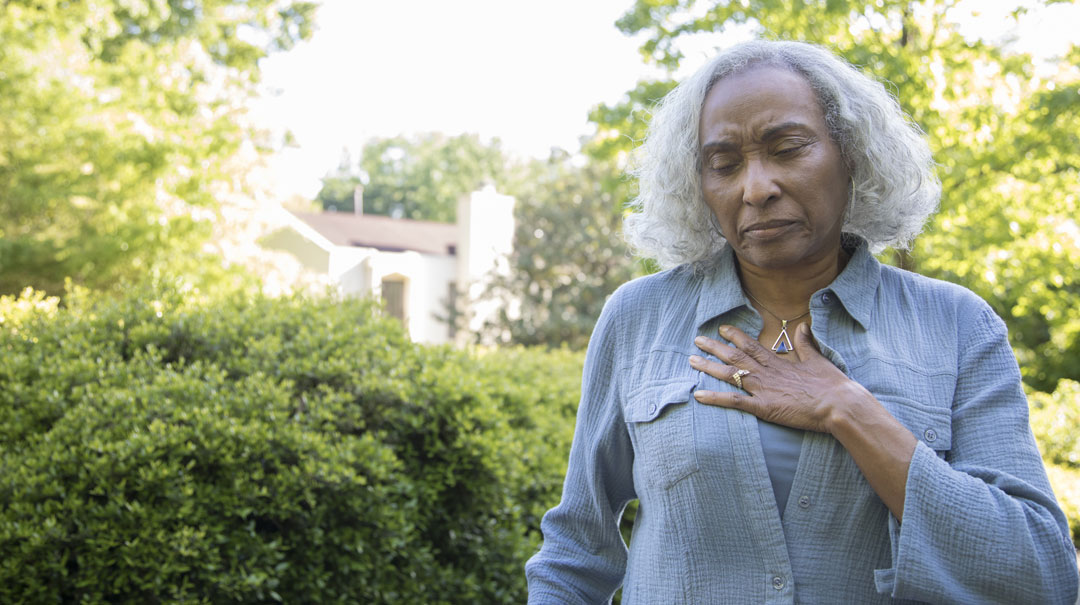 Do you know what and where your esophagus is? Situated just in front of the spinal cord, this muscular tube connects the mouth to the stomach. It provides a critical pathway to deliver food and drink to the stomach after we chew and swallow.

So, it’s no surprise that a disease of the esophagus can severely impact your life. In fact, although this type of cancer accounts for just 1% of cancers diagnosed each year in the U.S. (about 18,000 cases), the esophageal cancer survival rate is grim—at least 16,000 of those affected will not survive.

In the U.S., adenocarcinoma is the most common type of esophageal cancer. Unfortunately, because early esophageal cancer symptoms can often resemble less serious conditions, this cancer can go untreated for years.

And its relative rarity means that it doesn’t typically receive the same level of research as more prevalent cancers. But the future looks brighter. Adenocarcinoma is associated with genetic markers, and strong research is underway to refine that science. This research may produce better tools for early detection of esophageal cancers and increase the patient’s chances of successful treatment.

Why does cancer of the esophagus occur? Many of the causes are not yet completely understood.

The #1 cause of esophageal cancer in the U.S. is reflux, which is commonly associated with unhealthy diet and obesity.

Our stomach typically produces 1.5 liters of gastric acid to digest the food we eat on a daily basis. Occasionally acid may backflow from the stomach to the esophagus, where it causes irritation, inflammation, and pain—what we commonly refer to as heartburn. When reflux is left untreated, it bathes the esophagus in acidic juice. And although the stomach is resistant to acid, the esophagus is not.

This uncontrolled reflux and constant inflammation of the esophagus then becomes a gateway to reflux esophagitis and esophageal cancer.

Of course, the presence of gastroesophageal reflux disease (or GERD) is not a guarantee that cancer will result. But the more vigilant and aggressive we are about treating reflux, the more malignancies we can avoid.

The other type of esophageal cancer is squamous cell carcinoma. This is more commonly associated with the consumption of tobacco, particularly when combined with alcohol. We’re not sure if alcohol has a direct effect; however, we do know that smokers tend to increase their smoking habit when they drink.

Daily consumption of hot beverages that burn the inner lining of the esophagus, as well as of cured and pickled foods, may also contribute to the incidence of esophageal squamous cell carcinoma. The latter practice is very common in Asian cultures.

We know that age and genetics play a role. While squamous cell cancer is more common among African Americans, adenocarcinoma more commonly affects Caucasians. Men are also more likely to be affected than women.

Another risk factor is achalasia, a condition that occurs when the contents of the esophagus fail to empty into the stomach due to a muscular defect where the lower esophageal sphincter fails to relax. This is, in essence, the opposite of reflux. The esophagus is not meant to contain food for long periods—if food becomes lodged there, inflammation and fermentation can occur. This can indeed foster the development of cancer.

Not as common but certainly also a risk factor is alkaline burn injury. It’s critical to keep household chemicals locked away from children who may ingest them accidentally, as swallowing an alkaline chemical like lye can cause deep burns within a child’s GI tract. This predisposes them to development of esophageal strictures and esophageal squamous cell cancer.

It’s not unusual for anyone to experience a bout of heartburn or abdominal discomfort after consuming a spicy or acidic meal or overdoing it with food and drink. In a healthy GI tract, long-lasting issues are not common, and occasional episodes can be easily managed with simple antacids. But unfortunately, millions of people do experience repeated heartburn and may self-medicate for years without medical supervision.

Dozens of over-the-counter heartburn remedies are available, such as TUMS® and Maalox®. These are just temporary fixes and, while they provide intermittent relief, they are not long-term solutions. Prescription drugs such as omeprazole (Prilosec OTC®), esomeprazole (Nexium®), lansoprazole (Prevacid®), cimetidine (Tagamet®), and famotidine (Pepcid®) reduce stomach acid production at the cellular level and can be extremely effective against GERD. A surgical fix where the stomach is brought down into the abdomen from the chest and the lower esophageal sphincter is reconstructed is another option for reflux if medical therapy doesn’t work.

If you experience heartburn more than twice a week, or if it persists over weeks or months, consult your healthcare professional. This condition is often easily treatable by a physician, so don’t risk trying to manage it long-term on your own.

It is also certainly time to be evaluated by a medical professional if your symptoms have advanced to consistent pain in the upper abdomen, or if you have constant hoarseness, persistent cough, chest pain, difficulty swallowing, or unexplained weight loss.

Over-the-counter heartburn medications should never be taken long-term without consulting a doctor. They could mask symptoms of more serious issues. More from Dr. Puja Khaitan. https://bit.ly/31jt1Ne via @MedStarWHC

In order to diagnose problems of the esophagus, gastroenterologists rely primarily on symptoms and endoscopy. Endoscopy is an invasive procedure by which a camera is introduced into the patient’s food pipe, allowing a thorough examination of the esophagus and stomach.

Other diagnostic approaches can include:

Esophagram: The patient swallows a barium fluid, and X-ray images of the esophagus are examined for abnormalities highlighted by the barium. Other imaging studies may include a computerized tomography (CT) scan, magnetic resonance imaging (MRI), or a positron emission tomography (PET) scan.

Manometry: Pressure in the esophagus is measured to gauge how well it is functioning and moving food.

Endoscopic ultrasound: This test helps us determine how deep a tumor, once diagnosed, may have grown and if disease has spread to regional lymph nodes.

Biopsy: This procedure allows us to collect a small amount of tissue for pathologic analysis of an abnormal mass or nodule. This helps us decide on appropriate treatment tailored to the specific diagnosis.

Bronchoscopy: An endoscopy of the windpipe and lungs to determine if a patient’s airway has been affected.

Cytosponge: Small enough to swallow, this testing device measures acidity and can help us identify Barrett’s esophagus, caused when the lining of the esophagus becomes damaged by acid reflux.

Some pre-cancerous conditions, particularly reflux disease, can be effectively treated with medication. Barrett’s esophagus may likewise respond to medication or to ablative therapy that uses laser or radio wave energy to remove diseased tissue.

With surgery, we can often correct precancerous problems like reflux and achalasia. In a very limited number of cases, squamous cell cancer—when discovered early—may even respond well to radiation and chemotherapy, with no need for surgery. In some cases, minimally invasive surgery—called endoscopic resection—of the esophagus is possible, depending on the patient’s overall health and the stage of the disease.

Sometimes we discover that polyps have formed in the esophagus—polyps similar to those found in the colon, but unfortunately not as easy to remove. Occasionally, we’re able to endoscopically remove a small tumor that has not yet penetrated deeply into the walls of the esophagus.

However, most esophageal cancers require resection, removing part or the majority of the esophagus. In these cases, we may also use chemotherapy and radiation, either in a preoperative or postoperative setting. Transplantation is not considered a viable option, as it requires suppressing the immune system—inadvisable when cancer is present.

After removing an esophagus, the most important element to one’s recovery is how to re-establish GI continuity. The most common choice of reconstruction is using the stomach and pulling it up in the chest. This works best for lower esophageal tumors. Tumors closer to the mouth and throat present greater challenges and may even require removal of the voice box.

In cases where the esophagus requires removal, the cancer survivor faces some serious lifestyle challenges. Most patients require a feeding tube for nutrition for at least the first few months after surgery until their oral intake catches up. For example, the patient initially cannot consume large meals, because the stomach can no longer perform its original function of storing and processing food. Survivors must instead eat many small meals throughout the day, and the type of food must be strictly managed to aid digestion.

Clearly, esophageal surgeries are life-changing events and not without potential complications—all reasons why it’s vital to help prevent this cancer from occurring and to recognize early signs.

How to Reduce the Risk of Esophageal Cancer

Until we have better ways to discover and treat esophageal cancer, prevention remains our most important strategy: the more that people know the risks, the more lives we can save.

Here are some immediate ways to reduce your risk of esophageal cancer and precancerous conditions:

Our Lung & Esophageal Center team provides comprehensive care for patients with the full range of benign and malignant thoracic conditions, with a focus on diagnostics and surgical treatments. We also work closely with other specialists—dietitians, social workers, rehabilitative experts—to help each patient maintain the best possible quality of life, as they manage or recuperate from aspects of this difficult disease.

Reach out to our specialists.