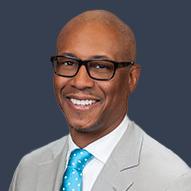 Dr. Ahaghotu has completed more than 50 medical mission trips in West Africa.  He has made the mission of his career to work with vulnerable communities and diverse populations.