Every year, hundreds of thousands of men are diagnosed with cancers specific to men. The good news is that these cancers are treatable if found early. Diets and programs also exist that can help to lessen the risk of these diseases.

Many men hesitate to be screened for these cancers because of traditional male stereotypes, and a fear that if diagnosed, a surgical treatment will be necessary. A diagnosis of testicular cancer does not automatically mean surgery. Depending on the stage of the cancer, there are a number of other options that can be explored.

Testicular cancer is a relatively rare, but highly curable, disease. Though it accounts for only one percent of all cancer in men, testicular cancer is the most common cancer in young men between the ages of 15 and 35. It is also more common in Caucasian men than in African American, Asian, or Hispanic men. Additionally, research has also shown that testicular cancer is sometimes linked to certain other rare conditions in which the testicles do not develop normally, including:

There are two main classifications of testicular cancer:

Symptoms of testicular cancer may include:

These symptoms can be caused by cancer or by other conditions. It's important to see a doctor, preferably a urologist, to determine the cause of any symptoms.

At MedStar Health, we use several tests to diagnosis testicular cancer, including:

If found early, testicular cancer is almost always curable. Treatment at MedStar Health depends on the type and stage of the cancer, the patient's age and general health, and other factors.

Surgery is the most common treatment for most stages of cancer of the testicle. A doctor may take out the cancer by removing one or both testicles. Also, surgery may be needed to remove the lymph nodes into which the testicles drain. (Surgical removal of lymph nodes usually is not necessary for patients with seminomas, which are slow growing and tend to stay localized.)

In the past, everyone with testicular cancer had some additional treatment beyond surgery. However, researchers have a better understanding of how the disease spreads and how to treat it. For instance, men whose cancer is stage one (confined to the testes) may not need any further treatment. For these patients, waiting and watching with regular testing is a reasonable option.

Men who opt to watch and wait must undergo regular testing, which may include regular chest X-rays, blood tests to measure tumor marker levels, physical exams and abdominal CT scans.

Chemotherapy is the use of drugs to kill cancer. Anticancer drugs are recommended when there are signs that the cancer has spread. These medications also are sometimes used when the doctor suspects that undetected cancer cells remain in the body after surgery or irradiation. This is known as "adjuvant therapy."

Chemotherapy may be given by mouth or intravenously injected into a muscle or a blood vessel. Chemotherapy is a systemic therapy, meaning that drugs travel through the blood stream and affect normal as well as cancerous cells all over the body. Common side effects may include nausea, hair loss, fatigue, diarrhea, vomiting, fever, chills, coughing/shortness of breath, mouth sores, or skin rash. Other side effects are dizziness, numbness, loss of reflexes, or difficulty hearing.

Many men worry that losing one testicle will affect their ability to have sexual intercourse or make them sterile. But a man with one healthy testicle can still have a normal erection, produce sperm, and father a child. Therefore, surgery to remove just one testicle does not make a patient impotent.

Also, surgery to remove the lymph nodes can cause infertility because it may interfere with the nerves involved in ejaculation. Some men may recover the ability to ejaculate without further treatment; others may be helped by medication. For many, though, it could be permanent. Men should talk to their doctor about a nerve-sparing surgical technique that may protect the ability to ejaculate. 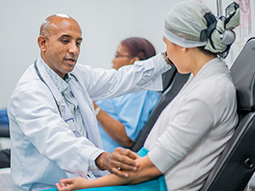 Getting the care you need starts with seeing one of our oncologists.