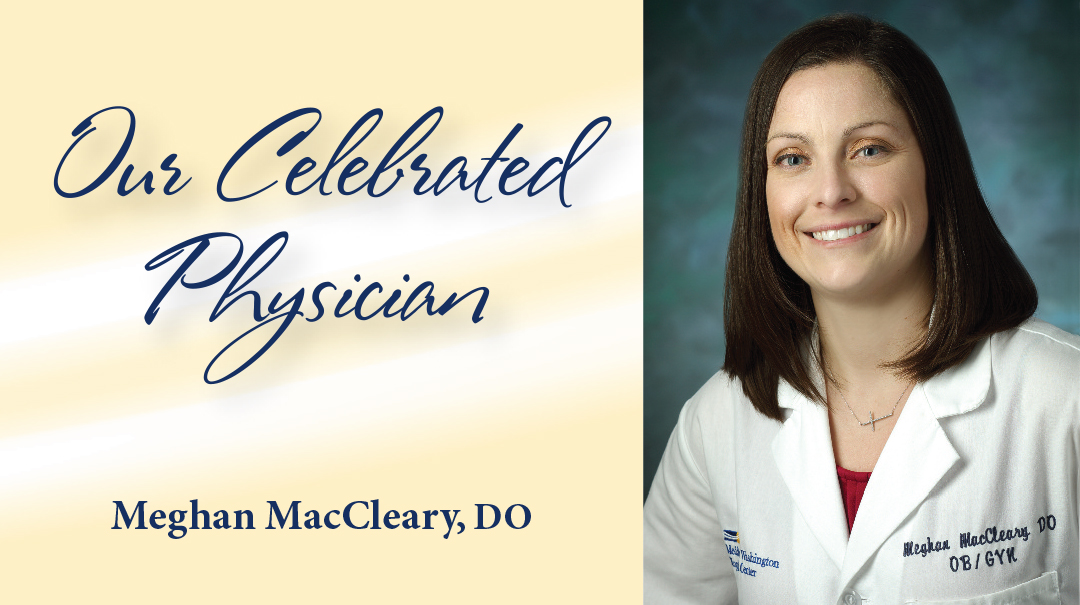 Physicians regularly make a difference in the lives of their patients. For Meghan MacCleary, DO, it was the other way around.

The Arizona native had initially ruled out obstetrics and gynecology as a career when she enrolled in the Arizona College of Osteopathic Medicine. But an obstetrics rotation changed that.

"I met and got to know the patients quite well, while learning a lot of interesting techniques and procedures,” Dr. MacCleary says. “Women’s health had always been important to me, and it was quite rewarding to be caring for women at a particularly vulnerable time.

By the end of her rotation, Dr. MacCleary says, “I was sold.”

Work at the Hospital Center

While in medical school, Dr. MacCleary was elected to Sigma Phi, the national osteopathic medicine honors fraternity. She then came to MedStar Washington Hospital Center and MedStar Georgetown University Hospital for her residency in Obstetrics & Gynecology. That experience was punctuated by opportunities to to give presentations on high-risk pregnancy at several conferences, and a year serving as Chief Resident.

In addition, Dr. MacCleary was named the Hospital Center’s 2016 Maternal Fetal Medicine resident of the year, and received the Department of Obstetrics & Gynecology’s Peterson Award, presented to the graduating resident who represents the best educator and patient advocate.

Now as an attending physician at the Hospital Center, Dr. MacCleary enjoys the diversity her work brings.

"You never know what’s going to happen,” she says of a typical day. “I may see patients in my office in the morning and perform c-section deliveries in the afternoon. Every patient is different, and brings a new challenge.”

Being an Ob/Gyn also allows Dr. MacCleary opportunities to consult and collaborate with colleagues in different parts of the Hospital Center. “I get to see more of what’s happening in medicine,” she adds.

Dr. MacCleary’s already-busy life will become busier in March, when she marries another Ob/Gyn who’s currently finishing his residency. Together, they enjoy hiking, trying out restaurants, wineries and craft breweries. The couple have also brewed several varieties of beer on their own, including a Belgian wheat and a Scotch Ale.

“It’s good to have a lot of mutual interests,” she says, “but I’m sure we’ll find ourselves talking about work and medicine a lot.”