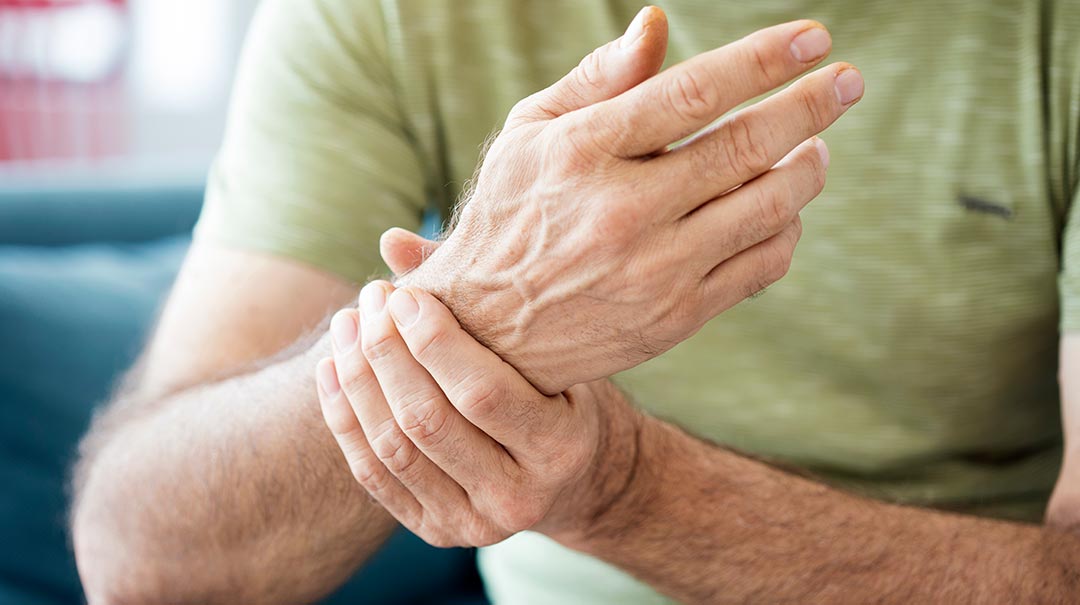 Rheumatoid arthritis is a chronic inflammatory condition that primarily affects peripheral joints (typically the hands, wrists, elbows, knees, feet, and ankles) of about 1.5 million Americans, due to the immune system becoming inappropriately activated. The disease also can affect organs such as the heart, lungs, eyes, and skin. The most common symptoms include:

Most people get the disease around their 50s, although it can often happen earlier or later in life. The exact cause of rheumatoid arthritis is not known. Researchers have identified individual genes that associate with the development of the disease and also some environmental risk factors that include smoking and poor dental hygiene.

Symptoms often become recognizable once inflammation sets in. While we could only provide some limited pain relief years ago, we now have new treatments that can restore the functionality of affected joints and prevent permanent damage and progression to disability. These new treatments have revolutionized rheumatoid arthritis patient care.

How is rheumatoid arthritis diagnosed?

Diagnosis begins with review of a patient’s history and symptoms combined with a thorough physical exam by a rheumatologist, and specific laboratory workup. Rheumatoid arthritis is a systemic disease, which means that it can affect the whole body, not just the joints. As a result, we will also look for symptoms such as generalized weakness, fatigue, malaise, unintentional weight loss, or even less common manifestations such as shortness of breath, cough, eye redness/pain, or skin nodules.

How is rheumatoid arthritis treated?

People with rheumatoid arthritis have a great chance at managing their symptoms, preventing further damage, and living relatively normal lives with current treatment options—especially if it’s treated early or before joints are heavily damaged.

Years ago, corticosteroids (aka “cortisone” or “steroids”), which we still use for patients with bad flare-ups to provide fast relief, was the only medication patients could use. But patients now have new alternatives, including:

Previous medications addressed pain and symptoms but were inadequate for the treatment of inflammation, which is the source of pain and the cause of subsequent irreversible damage and disability. New medications, however, can target the inflammation and often restore a patient’s functionality, allowing them to get back to some of their normal activities, depending on how affected their joints are. It is important to note that full restoration of their functionality isn’t always possible once the arthritis has caused permanent damage. In some of these patients, joint replacement by an orthopedic surgeon can be an effective next step.

Physical therapy is also a part of treatment, as it can strengthen muscles, providing better support to affected joints, and increase the joints’ range of motion. The combination of early, effective treatment with physical therapy can often lead to sustained remission and restoration of function, and allow patients to return to activities such as running, swimming, and playing sports. Others do so with modifications, such as restrictions on the amount of time spent on an activity or special shoe insoles or joint braces that minimize the impact on their joints.

I often recall the story of a woman in her 60s with severe rheumatoid arthritis who had unsuccessfully tried several medications, including high doses of steroids. Even though her symptoms were briefly relieved at times, she had never been able to get through a day pain-free, and she had developed joint deformities and motion limitation. As a result, she became increasingly depressed and hopeless, which further impacted her quality of life as she was no longer able to enjoy time with her children and grandchildren.

Availability of newer medications has certainly provided more options, but I was also starting to feel discouraged after many options failed. Switching medications can take anywhere from a few weeks to several months to take effect, and the patient was understandably desperate. After multiple treatment changes and a lot of perseverance from the patient and our medical team, we identified an injectable medication that worked well for her. Over the following months, her joint swelling and pain improved remarkably, and she became more functional again. During her follow up visits, she explained how she had been convinced she would never find relief, and yet she was now able to enjoy life with her family and friends. It is hard to describe in words how thankful she was and how happy her outcome made me feel.

Can symptoms come back, even during treatment?

Even when a patient consistently takes their medication, their rheumatoid arthritis still can become active from time to time. While we don’t always know the reason, sometimes a viral infection such as the flu or a cold can trigger the immune response, resulting in the arthritis flaring; other times, flare-ups occur for no obvious reason.

When that happens, patients usually experience increased pain in the affected joints that persists if it’s not treated. In this case, patients should speak to their rheumatologist about their symptoms so they can be tested and have their medication regimen modified, if necessary.

People with rheumatoid #arthritis can experience flare-ups when they have the #flu or cold. Dr. Loupasakis says patients should speak to their rheumatologist if this happens so they can be tested and have medications modified if necessary. https://bit.ly/2D2gDF1 @MedStarWHC

How can I prevent rheumatoid arthritis?

Smoking and poor oral hygiene are modifiable risk factors for rheumatoid arthritis, according to studies. Both smoking and the bacteria that arise in the mouth when people don’t take good care of their teeth can affect the tissues in the lungs and mouth in a way that may lead to stimulation of the immune system. As a result, inflammation can occur and may ultimately involve the joints leading to rheumatoid arthritis.

We implement a team approach at MedStar Washington Hospital Center by working closely across specialties. For example, patients not only will consult with a rheumatologist but also physical therapists, orthopedic surgeons, pain specialists, and physiatrists. We also provide referrals to psychotherapists and psychiatrists as needed to support our patients during the stressful course of chronic disease. This helps patients get support for their rheumatoid arthritis as well as their mental health, since long-lasting symptoms can be emotionally difficult on patients.

Rheumatoid arthritis treatment has come a long way over the years. With the ability to prevent further damage and often restore the functionality of affected joints, patients should speak to a doctor if they experience symptoms to find a solution that works best for them.